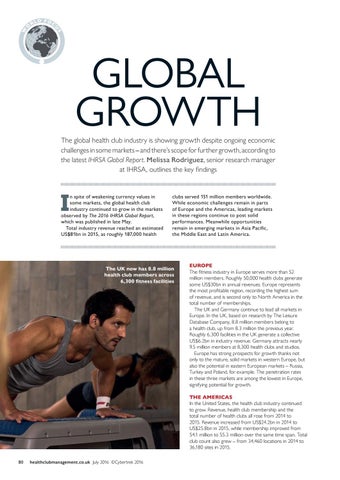 The global health club industry is showing growth despite ongoing economic challenges in some markets – and there’s scope for further growth, according to the latest IHRSA Global Report. Melissa Rodriguez, senior research manager at IHRSA, outlines the key findings

n spite of weakening currency values in some markets, the global health club industry continued to grow in the markets observed by The 2016 IHRSA Global Report, which was published in late May. Total industry revenue reached an estimated US$81bn in 2015, as roughly 187,000 health

EUROPE The fitness industry in Europe serves more than 52 million members. Roughly 50,000 health clubs generate some US$30bn in annual revenues. Europe represents the most profitable region, recording the highest sum of revenue, and is second only to North America in the total number of memberships. The UK and Germany continue to lead all markets in Europe. In the UK, based on research by The Leisure Database Company, 8.8 million members belong to a health club, up from 8.3 million the previous year. Roughly 6,300 facilities in the UK generate a collective US$6.2bn in industry revenue. Germany attracts nearly 9.5 million members at 8,300 health clubs and studios. Europe has strong prospects for growth thanks not only to the mature, solid markets in western Europe, but also the potential in eastern European markets – Russia, Turkey and Poland, for example. The penetration rates in these three markets are among the lowest in Europe, signifying potential for growth. THE AMERICAS In the United States, the health club industry continued to grow. Revenue, health club membership and the total number of health clubs all rose from 2014 to 2015. Revenue increased from US$24.2bn in 2014 to US$25.8bn in 2015, while membership improved from 54.1 million to 55.3 million over the same time span. Total club count also grew – from 34,460 locations in 2014 to 36,180 sites in 2015.