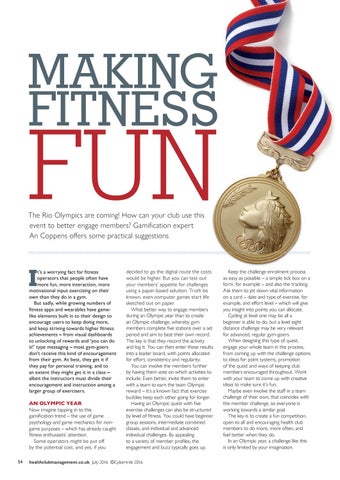 FUN The Rio Olympics are coming! How can your club use this event to better engage members? Gamification expert An Coppens oﬀers some practical suggestions

t’s a worrying fact for fitness operators that people often have more fun, more interaction, more motivational input exercising on their own than they do in a gym. But sadly, while growing numbers of fitness apps and wearables have gamelike elements built in to their design to encourage users to keep doing more, and keep striving towards higher fitness achievements – from visual dashboards to unlocking of rewards and ‘you can do it!’ type messaging – most gym-goers don’t receive this kind of encouragement from their gym. At best, they get it if they pay for personal training, and to an extent they might get it in a class – albeit the instructors must divide their encouragement and instruction among a larger group of exercisers. AN OLYMPIC YEAR Now imagine tapping in to this gamification trend – the use of game psychology and game mechanics for nongame purposes – which has already caught fitness enthusiasts’ attention. Some operators might be put oﬀ by the potential cost, and yes, if you

decided to go the digital route the costs would be higher. But you can test out your members’ appetite for challenges using a paper-based solution. Truth be known, even computer games start life sketched out on paper. What better way to engage members during an Olympic year than to create an Olympic challenge, whereby gym members complete five stations over a set period and aim to beat their own record. The key is that they record the activity and log it. You can then enter these results into a leader board, with points allocated for eﬀort, consistency and regularity. You can involve the members further by having them vote on which activities to include. Even better, invite them to enter with a team to earn the team Olympic reward – it’s a known fact that exercise buddies keep each other going for longer. Having an Olympic quest with five exercise challenges can also be structured by level of fitness. You could have beginner group sessions, intermediate combined classes, and individual and advanced individual challenges. By appealing to a variety of member profiles, the engagement and buzz typically goes up.

Keep the challenge enrolment process as easy as possible – a simple tick box on a form, for example – and also the tracking. Ask them to jot down vital information on a card – date and type of exercise, for example, and eﬀort level – which will give you insight into points you can allocate. Cycling at level one may be all a beginner is able to do, but a level eight distance challenge may be very relevant for advanced, regular gym-goers. When designing this type of quest, engage your whole team in the process, from coming up with the challenge options to ideas for point systems, promotion of the quest and ways of keeping club members encouraged throughout. Work with your team to come up with creative ideas to make sure it’s fun. Maybe even involve the staﬀ in a team challenge of their own, that coincides with the member challenge, so everyone is working towards a similar goal. The key is to create a fun competition, open to all and encouraging health club members to do more, more often, and feel better when they do. In an Olympic year, a challenge like this is only limited by your imagination.