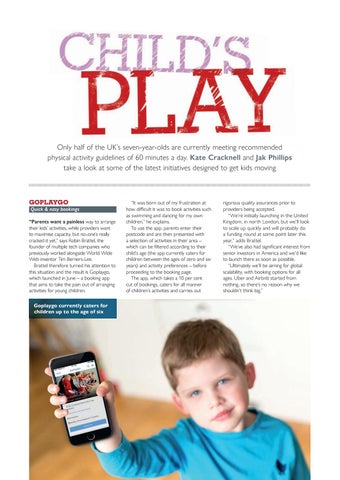 Only half of the UK’s seven-year-olds are currently meeting recommended physical activity guidelines of 60 minutes a day. Kate Cracknell and Jak Phillips take a look at some of the latest initiatives designed to get kids moving

“Parents want a painless way to arrange their kids’ activities, while providers want to maximise capacity, but no-one’s really cracked it yet,” says Robin Brattel, the founder of multiple tech companies who previously worked alongside World Wide Web inventor Tim Berners-Lee. Brattel therefore turned his attention to this situation and the result is Goplaygo, which launched in June – a booking app that aims to take the pain out of arranging activities for young children.

“It was born out of my frustration at how diﬃcult it was to book activities such as swimming and dancing for my own children,” he explains. To use the app, parents enter their postcode and are then presented with a selection of activities in their area – which can be filtered according to their child’s age (the app currently caters for children between the ages of zero and six years) and activity preferences – before proceeding to the booking page. The app, which takes a 10 per cent cut of bookings, caters for all manner of children’s activities and carries out

Goplaygo currently caters for children up to the age of six

rigorous quality assurances prior to providers being accepted. “We’re initially launching in the United Kingdom, in north London, but we’ll look to scale up quickly and will probably do a funding round at some point later this year,” adds Brattel. “We’ve also had significant interest from senior investors in America and we’d like to launch there as soon as possible. “Ultimately we’ll be aiming for global scalability, with booking options for all ages. Uber and Airbnb started from nothing, so there’s no reason why we shouldn’t think big.”