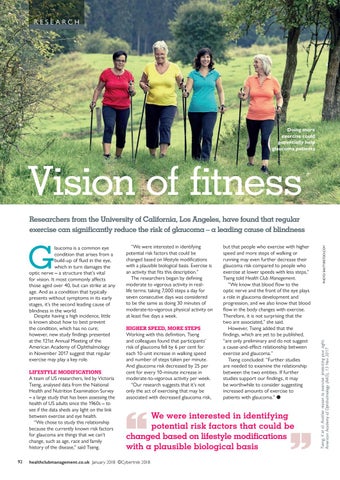 LIFESTYLE MODIFICATIONS A team of US researchers, led by Victoria Tseng, analysed data from the National Health and Nutrition Examination Survey – a large study that has been assessing the health of US adults since the 1960s – to see if the data sheds any light on the link between exercise and eye health. “We chose to study this relationship because the currently known risk factors for glaucoma are things that we can’t change, such as age, race and family history of the disease,” said Tseng. 92

“We were interested in identifying potential risk factors that could be changed based on lifestyle modifications with a plausible biological basis. Exercise is an activity that fits this description.” The researchers began by defining moderate to vigorous activity in reallife terms: taking 7,000 steps a day for seven consecutive days was considered to be the same as doing 30 minutes of moderate-to-vigorous physical activity on at least five days a week. HIGHER SPEED, MORE STEPS Working with this definition, Tseng and colleagues found that participants’ risk of glaucoma fell by 6 per cent for each 10-unit increase in walking speed and number of steps taken per minute. And glaucoma risk decreased by 25 per cent for every 10-minute increase in moderate-to-vigorous activity per week. “Our research suggests that it’s not only the act of exercising that may be associated with decreased glaucoma risk,

but that people who exercise with higher speed and more steps of walking or running may even further decrease their glaucoma risk compared to people who exercise at lower speeds with less steps,” Tseng told Health Club Management. “We know that blood flow to the optic nerve and the front of the eye plays a role in glaucoma development and progression, and we also know that blood flow in the body changes with exercise. Therefore, it is not surprising that the two are associated,” she said. However, Tseng added that the findings, which are yet to be published, “are only preliminary and do not suggest a cause-and-effect relationship between exercise and glaucoma.” Tseng concluded: “Further studies are needed to examine the relationship between the two entities. If further studies support our findings, it may be worthwhile to consider suggesting increased amounts of exercise to patients with glaucoma.” ●

laucoma is a common eye condition that arises from a build-up of fluid in the eye, which in turn damages the optic nerve – a structure that’s vital for vision. It most commonly affects those aged over 40, but can strike at any age. And as a condition that typically presents without symptoms in its early stages, it’s the second leading cause of blindness in the world. Despite having a high incidence, little is known about how to best prevent the condition, which has no cure; however, new study findings presented at the 121st Annual Meeting of the American Academy of Ophthalmology in November 2017 suggest that regular exercise may play a key role.

Researchers from the University of California, Los Angeles, have found that regular exercise can significantly reduce the risk of glaucoma – a leading cause of blindness