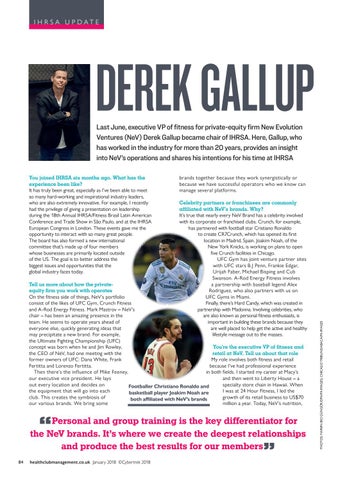 DEREK GALLUP Last June, executive VP of fitness for private-equity firm New Evolution Ventures (NeV) Derek Gallup became chair of IHRSA. Here, Gallup, who has worked in the industry for more than 20 years, provides an insight into NeV’s operations and shares his intentions for his time at IHRSA

brands together because they work synergistically or because we have successful operators who we know can manage several platforms. Celebrity partners or franchisees are commonly affiliated with NeV’s brands. Why? It’s true that nearly every NeV Brand has a celebrity involved with its corporate or franchised clubs. Crunch, for example, has partnered with football star Cristiano Ronaldo to create CR7Crunch, which has opened its first location in Madrid, Spain. Joakim Noah, of the New York Knicks, is working on plans to open five Crunch facilities in Chicago. UFC Gym has joint venture partner sites with UFC stars B.J Penn, Frankie Edgar, Urijah Faber, Michael Bisping and Cub Swanson. A-Rod Energy Fitness involves a partnership with baseball legend Alex Rodriguez, who also partners with us on UFC Gyms in Miami. Finally, there’s Hard Candy, which was created in partnership with Madonna. Involving celebrities, who are also known as personal fitness enthusiasts, is important in building these brands because they are well placed to help get the active and healthy lifestyle message out to the masses.

Tell us more about how the privateequity firm you work with operates On the fi tness side of things, NeV’s portfolio consist of the likes of UFC Gym, Crunch Fitness and A-Rod Energy Fitness. Mark Mastrov – NeV’s chair – has been an amazing presence in the team. He seems to operate years ahead of everyone else, quickly generating ideas that may precipitate a new brand. For example, the Ultimate Fighting Championship (UFC) concept was born when he and Jim Rowley, You’re the executive VP of fitness and the CEO of NeV, had one meeting with the retail at NeV. Tell us about that role former owners of UFC: Dana White, Frank My role involves both fi tness and retail Fertitta and Lorenzo Fertitta. because I’ve had professional experience Then there’s the influence of Mike Feeney, in both fields. I started my career at Macy’s our executive vice president. He lays and then went to Liberty House – a out every location and decides on specialty store chain in Hawaii. When Footballer Christiano Ronaldo and the equipment that will go into each I was at 24 Hour Fitness, I led the basketball player Joakim Noah are club. This creates the symbiosis of growth of its retail business to US$70 both aﬃliated with NeV&#39;s brands our various brands. We bring some million a year. Today, NeV’s nutrition,

Personal and group training is the key differentiator for “ the NeV brands. It’s where we create the deepest relationships

and produce the best results for our members 84

You joined IHRSA six months ago. What has the experience been like? It has truly been great, especially as I’ve been able to meet so many hard-working and inspirational industry leaders, who are also extremely innovative. For example, I recently had the privilege of giving a presentation on leadership during the 18th Annual IHRSA/Fitness Brasil Latin American Conference and Trade Show in São Paulo, and at the IHRSA European Congress in London. These events gave me the opportunity to interact with so many great people. The board has also formed a new international committee that’s made up of four members whose businesses are primarily located outside of the US. The goal is to better address the biggest issues and opportunities that the global industry faces today.