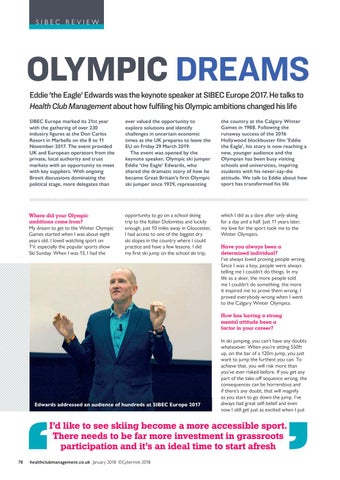 OLYMPIC DREAMS Eddie 'the Eagle' Edwards was the keynote speaker at SIBEC Europe 2017. He talks to Health Club Management about how fulfiling his Olympic ambitions changed his life SIBEC Europe marked its 21st year with the gathering of over 230 industry figures at the Don Carlos Resort in Marbella on the 8 to 11 November 2017. The event provided UK and European operators from the private, local authority and trust markets with an opportunity to meet with key suppliers. With ongoing Brexit discussions dominating the political stage, more delegates than

ever valued the opportunity to explore solutions and identify challenges in uncertain economic times as the UK prepares to leave the EU on Friday 29 March 2019. The event was opened by the keynote speaker, Olympic ski jumper Eddie ‘the Eagle’ Edwards, who shared the dramatic story of how he became Great Britain’s first Olympic ski jumper since 1929, representing

the country at the Calgary Winter Games in 1988. Following the runaway success of the 2016 Hollywood blockbuster film 'Eddie the Eagle', his story is now reaching a new, younger audience and the Olympian has been busy visiting schools and universities, inspiring students with his never-say-die attitude. We talk to Eddie about how sport has transformed his life

Where did your Olympic ambitions come from? My dream to get to the Winter Olympic Games started when I was about eight years old. I loved watching sport on TV, especially the popular sports show Ski Sunday. When I was 13, I had the

opportunity to go on a school skiing trip to the Italian Dolomites and luckily enough, just 10 miles away in Gloucester, I had access to one of the biggest dry ski slopes in the country where I could practice and have a few lessons. I did my first ski jump on the school ski trip,

which I did as a dare after only skiing for a day and a half. Just 11 years later, my love for the sport took me to the Winter Olympics. Have you always been a determined individual? I’ve always loved proving people wrong. Since I was a boy, people were always telling me I couldn’t do things. In my life as a skier, the more people told me I couldn’t do something, the more it inspired me to prove them wrong. I proved everybody wrong when I went to the Calgary Winter Olympics. How has having a strong mental attitude been a factor in your career?

Edwards addressed an audience of hundreds at SIBEC Europe 2017

In ski jumping, you can’t have any doubts whatsoever. When you’re sitting 550ft up, on the bar of a 120m jump, you just want to jump the furthest you can. To achieve that, you will risk more than you’ve ever risked before. If you get any part of the take-oﬀ sequence wrong, the consequences can be horrendous and if there’s any doubt, that will magnify as you start to go down the jump. I’ve always had great self-belief and even now I still get just as excited when I put

I’d like to see skiing become a more accessible sport. There needs to be far more investment in grassroots participation and it’s an ideal time to start afresh 78