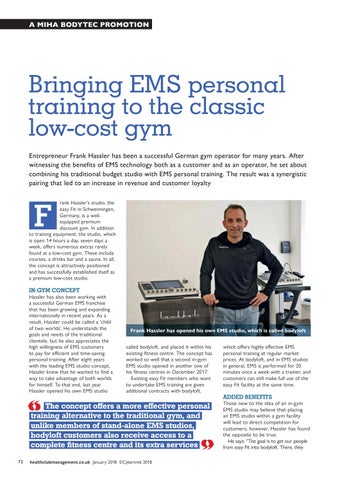 Bringing EMS personal training to the classic low-cost gym Entrepreneur Frank Hassler has been a successful German gym operator for many years. After witnessing the benefits of EMS technology both as a customer and as an operator, he set about combining his traditional budget studio with EMS personal training. The result was a synergistic pairing that led to an increase in revenue and customer loyalty

rank Hassler’s studio, the easy Fit in Schwenningen, Germany, is a wellequipped premium discount gym. In addition to training equipment, the studio, which is open 14 hours a day, seven days a week, offers numerous extras rarely found at a low-cost gym. These include courses, a drinks bar and a sauna. In all, the concept is attractively positioned and has successfully established itself as a premium low-cost studio.

IN-GYM CONCEPT Hassler has also been working with a successful German EMS franchise that has been growing and expanding internationally in recent years. As a result, Hassler could be called a ‘child of two worlds’. He understands the goals and needs of the traditional clientele, but he also appreciates the high willingness of EMS customers to pay for efficient and time-saving personal training. After eight years with the leading EMS studio concept, Hassler knew that he wanted to find a way to take advantage of both worlds for himself. To that end, last year Hassler opened his own EMS studio

Frank Hassler has opened his own EMS studio, which is called bodyloft called bodyloft, and placed it within his existing fitness centre. The concept has worked so well that a second in-gym EMS studio opened in another one of his fitness centres in December 2017. Existing easy Fit members who want to undertake EMS training are given additional contracts with bodyloft,

The concept offers a more effective personal training alternative to the traditional gym, and unlike members of stand-alone EMS studios, bodyloft customers also receive access to a complete fitness centre and its extra services 72

which offers highly effective EMS personal training at regular market prices. At bodyloft, and in EMS studios in general, EMS is performed for 20 minutes once a week with a trainer, and customers can still make full use of the easy Fit facility at the same time.

ADDED BENEFITS Those new to the idea of an in-gym EMS studio may believe that placing an EMS studio within a gym facility will lead to direct competition for customers; however, Hassler has found the opposite to be true. He says: “The goal is to get our people from easy Fit into bodyloft. There, they