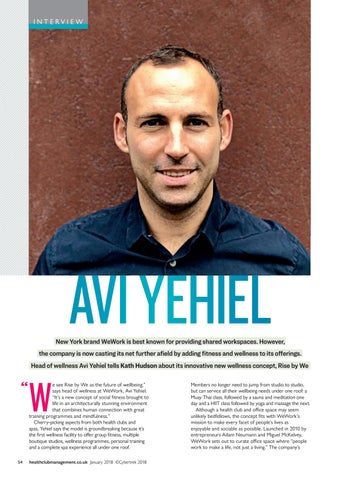 New York brand WeWork is best known for providing shared workspaces. However, the company is now casting its net further afield by adding fitness and wellness to its offerings. Head of wellness Avi Yehiel tells Kath Hudson about its innovative new wellness concept, Rise by We

e see Rise by We as the future of wellbeing,” says head of wellness at WeWork, Avi Yehiel. “It’s a new concept of social fitness brought to life in an architecturally stunning environment that combines human connection with great training programmes and mindfulness.” Cherry-picking aspects from both health clubs and spas, Yehiel says the model is groundbreaking because it’s the first wellness facility to oﬀer group fitness, multiple boutique studios, wellness programmes, personal training and a complete spa experience all under one roof. 54

Members no longer need to jump from studio to studio, but can service all their wellbeing needs under one roof: a Muay Thai class, followed by a sauna and meditation one day and a HIIT class followed by yoga and massage the next. Although a health club and oﬃce space may seem unlikely bedfellows, the concept fits with WeWork’s mission to make every facet of people’s lives as enjoyable and sociable as possible. Launched in 2010 by entrepreneurs Adam Neumann and Miguel McKelvey, WeWork sets out to curate oﬃce space where “people work to make a life, not just a living.” The company’s