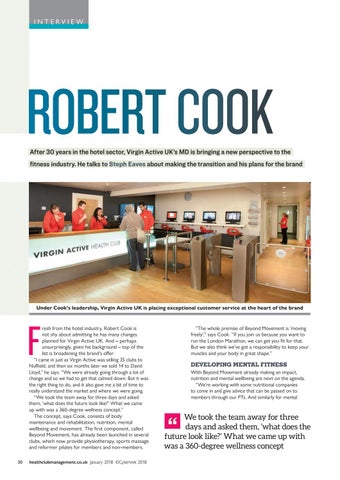 After 30 years in the hotel sector, Virgin Active UK’s MD is bringing a new perspective to the fitness industry. He talks to Steph Eaves about making the transition and his plans for the brand

Under Cook’s leadership, Virgin Active UK is placing exceptional customer service at the heart of the brand

resh from the hotel industry, Robert Cook is not shy about admitting he has many changes planned for Virgin Active UK. And – perhaps unsurprisingly, given his background – top of the list is broadening the brand’s oﬀer. “I came in just as Virgin Active was selling 35 clubs to Nuﬃeld, and then six months later we sold 14 to David Lloyd,” he says. “We were already going through a lot of change and so we had to get that calmed down. But it was the right thing to do, and it also gave me a bit of time to really understand the market and where we were going. “We took the team away for three days and asked them, ‘what does the future look like?’ What we came up with was a 360-degree wellness concept.” The concept, says Cook, consists of body maintenance and rehabilitation, nutrition, mental wellbeing and movement. The first component, called Beyond Movement, has already been launched in several clubs, which now provide physiotherapy, sports massage and reformer pilates for members and non-members.

“The whole premise of Beyond Movement is ‘moving freely’,” says Cook. “If you join us because you want to run the London Marathon, we can get you fit for that. But we also think we’ve got a responsibility to keep your muscles and your body in great shape.”

DEVELOPING MENTAL FITNESS With Beyond Movement already making an impact, nutrition and mental wellbeing are next on the agenda. “We’re working with some nutritional companies to come in and give advice that can be passed on to members through our PTs. And similarly for mental

We took the team away for three days and asked them, ‘what does the future look like?’ What we came up with was a 360-degree wellness concept