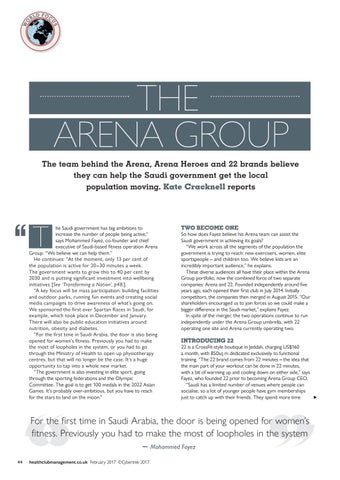 THE ARENA GROUP The team behind the Arena, Arena Heroes and 22 brands believe they can help the Saudi government get the local population moving. Kate Cracknell reports

he Saudi government has big ambitions to increase the number of people being active,” says Mohammed Fayez, co-founder and chief executive of Saudi-based fitness operation Arena Group. “We believe we can help them.” He continues: “At the moment, only 13 per cent of the population is active for 20 –30 minutes a week. The government wants to grow this to 40 per cent by 2030 and is putting significant investment into wellbeing initiatives [See ‘Transforming a Nation’, p48.]. “A key focus will be mass participation: building facilities and outdoor parks, running fun events and creating social media campaigns to drive awareness of what’s going on. We sponsored the first ever Spartan Races in Saudi, for example, which took place in December and January. There will also be public education initiatives around nutrition, obesity and diabetes. “For the fi rst time in Saudi Arabia, the door is also being opened for women’s fi tness. Previously you had to make the most of loopholes in the system, or you had to go through the Ministry of Health to open up physiotherapy centres, but that will no longer be the case. It’s a huge opportunity to tap into a whole new market. “The government is also investing in elite sport, going through the sporting federations and the Olympic Committee. The goal is to get 100 medals in the 2022 Asian Games. It’s probably over-ambitious, but you have to reach for the stars to land on the moon.”

TWO BECOME ONE So how does Fayez believe his Arena team can assist the Saudi government in achieving its goals? “We work across all the segments of the population the government is trying to reach: new exercisers, women, elite sportspeople – and children too. We believe kids are an incredibly important audience,” he explains. These diverse audiences all have their place within the Arena Group portfolio, now the combined force of two separate companies: Arena and 22. Founded independently around five years ago, each opened their first club in July 2014. Initially competitors, the companies then merged in August 2015. “Our shareholders encouraged us to join forces so we could make a bigger diﬀerence in the Saudi market,” explains Fayez. In spite of the merger, the two operations continue to run independently under the Arena Group umbrella, with 22 operating one site and Arena currently operating two.

INTRODUCING 22 22 is a CrossFit-style boutique in Jeddah, charging US$160 a month, with 850sq m dedicated exclusively to functional training. “The 22 brand comes from 22 minutes – the idea that the main part of your workout can be done in 22 minutes, with a bit of warming up and cooling down on either side,” says Fayez, who founded 22 prior to becoming Arena Group CEO. “Saudi has a limited number of venues where people can socialise, so a lot of younger people have gym memberships just to catch up with their friends. They spend more time

For the first time in Saudi Arabia, the door is being opened for women’s fitness. Previously you had to make the most of loopholes in the system – Mohammed Fayez 44