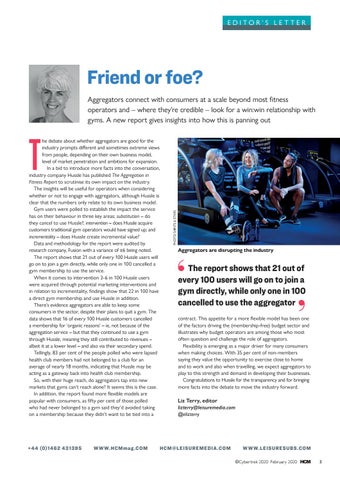 Friend or foe? Aggregators connect with consumers at a scale beyond most fitness operators and – where they’re credible – look for a win:win relationship with gyms. A new report gives insights into how this is panning out

he debate about whether aggregators are good for the industry prompts diﬀerent and sometimes extreme views from people, depending on their own business model, level of market penetration and ambitions for expansion. In a bid to introduce more facts into the conversation, industry company Hussle has published The Aggregation in Fitness Report to scrutinise its own impact on the industry. The insights will be useful for operators when considering whether or not to engage with aggregators, although Hussle is clear that the numbers only relate to its own business model. Gym users were polled to establish the impact the service has on their behaviour in three key areas: substitution – do they cancel to use Hussle?; intervention – does Hussle acquire customers traditional gym operators would have signed up; and incrementality – does Hussle create incremental value? Data and methodology for the report were audited by research company, Fusion with a variance of ±6 being noted. The report shows that 21 out of every 100 Hussle users will go on to join a gym directly, while only one in 100 cancelled a gym membership to use the service. When it comes to intervention 3-6 in 100 Hussle users were acquired through potential marketing interventions and in relation to incrementality, findings show that 22 in 100 have a direct gym membership and use Hussle in addition. There’s evidence aggregators are able to keep some consumers in the sector, despite their plans to quit a gym. The data shows that 16 of every 100 Hussle customers cancelled a membership for ‘organic reasons’ – ie, not because of the aggregation service – but that they continued to use a gym through Hussle, meaning they still contributed to revenues – albeit it at a lower level – and also via their secondary spend. Tellingly, 83 per cent of the people polled who were lapsed health club members had not belonged to a club for an average of nearly 18 months, indicating that Hussle may be acting as a gateway back into health club membership. So, with their huge reach, do aggregators tap into new markets that gyms can’t reach alone? It seems this is the case. In addition, the report found more flexible models are popular with consumers, as fifty per cent of those polled who had never belonged to a gym said they’d avoided taking on a membership because they didn’t want to be tied into a

Aggregators are disrupting the industry

The report shows that 21 out of every 100 users will go on to join a gym directly, while only one in 100 cancelled to use the aggregator contract. This appetite for a more flexible model has been one of the factors driving the (membership-free) budget sector and illustrates why budget operators are among those who most often question and challenge the role of aggregators. Flexibility is emerging as a major driver for many consumers when making choices. With 35 per cent of non-members saying they value the opportunity to exercise close to home and to work and also when travelling, we expect aggregators to play to this strength and demand in developing their businesses. Congratulations to Hussle for the transparency and for bringing more facts into the debate to move the industry forward.