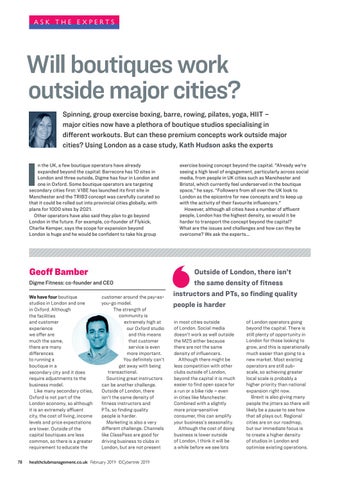 n the UK, a few boutique operators have already expanded beyond the capital: Barrecore has 10 sites in London and three outside, Digme has four in London and one in Oxford. Some boutique operators are targeting secondary cities first: V1BE has launched its first site in Manchester and the TRIB3 concept was carefully curated so that it could be rolled out into provincial cities globally, with plans for 1000 sites by 2021. Other operators have also said they plan to go beyond London in the future. For example, co-founder of Flykick, Charlie Kemper, says the scope for expansion beyond London is huge and he would be confident to take his group

Geoff Bamber Digme Fitness: co-founder and CEO We have four boutique studios in London and one in Oxford. Although the facilities and customer experience we off er are much the same, there are many diff erences to running a boutique in a secondary city and it does require adjustments to the business model. Like many secondary cities, Oxford is not part of the London economy, so although it is an extremely affluent city, the cost of living, income levels and price expectations are lower. Outside of the capital boutiques are less common, so there is a greater requirement to educate the 78

customer around the pay-asyou-go model. The strength of community is extremely high at our Oxford studio and this means that customer service is even more important. You definitely can’t get away with being transactional. Sourcing great instructors can be another challenge. Outside of London, there isn’t the same density of fitness instructors and PTs, so finding quality people is harder. Marketing is also a very diff erent challenge. Channels like ClassPass are good for driving business to clubs in London, but are not present

exercise boxing concept beyond the capital. &quot;Already we&#39;re seeing a high level of engagement, particularly across social media, from people in UK cities such as Manchester and Bristol, which currently feel underserved in the boutique space,” he says. “Followers from all over the UK look to London as the epicentre for new concepts and to keep up with the activity of their favourite influencers.&quot; However, although all cities have a number of affluent people, London has the highest density, so would it be harder to transport the concept beyond the capital? What are the issues and challenges and how can they be overcome? We ask the experts…

of London operators going beyond the capital. There is still plenty of opportunity in London for those looking to grow, and this is operationally much easier than going to a new market. Most existing operators are still subscale, so achieving greater local scale is probably a higher priority than national expansion right now. Brexit is also giving many people the jitters so there will likely be a pause to see how that all plays out. Regional cities are on our roadmap, but our immediate focus is to create a higher density of studios in London and optimise existing operations.