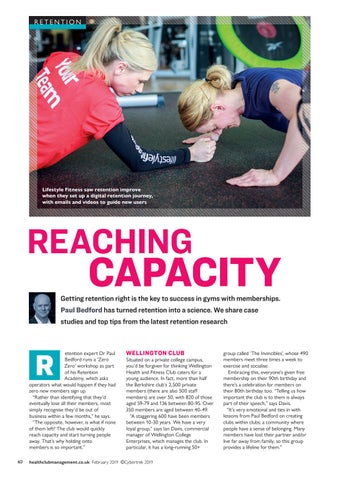 Lifestyle Fitness saw retention improve when they set up a digital retention journey, with emails and videos to guide new users

Getting retention right is the key to success in gyms with memberships. Paul Bedford has turned retention into a science. We share case studies and top tips from the latest retention research

etention expert Dr Paul Bedford runs a ‘Zero Zero’ workshop as part of his Retention Academy, which asks operators what would happen if they had zero new members sign up. “Rather than identifying that they’d eventually lose all their members, most simply recognise they’d be out of business within a few months,” he says. “The opposite, however, is what if none of them left? The club would quickly reach capacity and start turning people away. That’s why holding onto members is so important.” 60

Situated on a private college campus, you’d be forgiven for thinking Wellington Health and Fitness Club caters for a young audience. In fact, more than half the Berkshire club’s 2,500 private members (there are also 500 staff members) are over 50, with 820 of those aged 59-79 and 136 between 80-95. Over 350 members are aged between 40-49. “A staggering 600 have been members between 10-30 years. We have a very loyal group,” says Ian Davis, commercial manager of Wellington College Enterprises, which manages the club. In particular, it has a long-running 50+

group called ‘The Invincibles’, whose 490 members meet three times a week to exercise and socialise. Embracing this, everyone’s given free membership on their 90th birthday and there’s a celebration for members on their 80th birthday too. “Telling us how important the club is to them is always part of their speech,” says Davis. “It’s very emotional and ties in with lessons from Paul Bedford on creating clubs within clubs; a community where people have a sense of belonging. Many members have lost their partner and/or live far away from family, so this group provides a lifeline for them.”