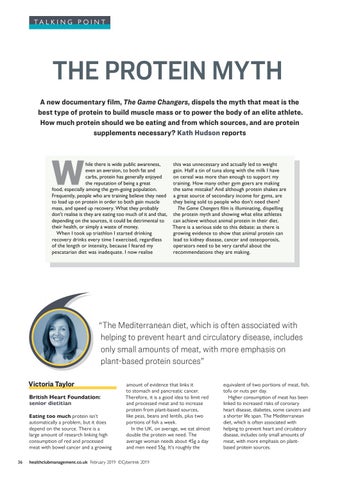 THE PROTEIN MYTH A new documentary film, The Game Changers, dispels the myth that meat is the best type of protein to build muscle mass or to power the body of an elite athlete. How much protein should we be eating and from which sources, and are protein supplements necessary? Kath Hudson reports

hile there is wide public awareness, this was unnecessary and actually led to weight even an aversion, to both fat and gain. Half a tin of tuna along with the milk I have carbs, protein has generally enjoyed on cereal was more than enough to support my the reputation of being a great training. How many other gym goers are making food, especially among the gym-going population. the same mistake? And although protein shakes are Frequently, people who are training believe they need a great source of secondary income for gyms, are to load up on protein in order to both gain muscle they being sold to people who don’t need them? mass, and speed up recovery. What they probably The Game Changers film is illuminating, dispelling don’t realise is they are eating too much of it and that, the protein myth and showing what elite athletes depending on the sources, it could be detrimental to can achieve without animal protein in their diet. their health, or simply a waste of money. There is a serious side to this debate: as there is When I took up triathlon I started drinking growing evidence to show that animal protein can recovery drinks every time I exercised, regardless lead to kidney disease, cancer and osteoporosis, of the length or intensity, because I feared my operators need to be very careful about the pescatarian diet was inadequate. I now realise recommendations they are making.

“The Mediterranean diet, which is often associated with helping to prevent heart and circulatory disease, includes only small amounts of meat, with more emphasis on plant-based protein sources” Victoria Taylor British Heart Foundation: senior dietitian Eating too much protein isn’t automatically a problem, but it does depend on the source. There is a large amount of research linking high consumption of red and processed meat with bowel cancer and a growing 36

amount of evidence that links it to stomach and pancreatic cancer. Therefore, it is a good idea to limit red and processed meat and to increase protein from plant-based sources, like peas, beans and lentils, plus two portions of fish a week. In the UK, on average, we eat almost double the protein we need. The average woman needs about 45g a day and men need 55g. It’s roughly the

equivalent of two portions of meat, fish, tofu or nuts per day. Higher consumption of meat has been linked to increased risks of coronary heart disease, diabetes, some cancers and a shorter life span. The Mediterranean diet, which is often associated with helping to prevent heart and circulatory disease, includes only small amounts of meat, with more emphasis on plantbased protein sources.