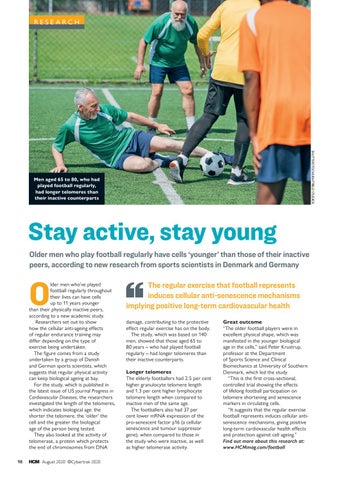 Men aged 65 to 80, who had played football regularly, had longer telomeres than their inactive counterparts

Stay active, stay young Older men who play football regularly have cells ‘younger’ than those of their inactive peers, according to new research from sports scientists in Denmark and Germany

lder men who’ve played football regularly throughout their lives can have cells up to 11 years younger than their physically inactive peers, according to a new academic study. Researchers set out to show how the cellular anti-ageing effects of regular endurance training may differ depending on the type of exercise being undertaken. The figure comes from a study undertaken by a group of Danish and German sports scientists, which suggests that regular physical activity can keep biological ageing at bay. For the study, which is published in the latest issue of US journal Progress in Cardiovascular Diseases, the researchers investigated the length of the telomeres, which indicates biological age: the shorter the telomere, the ‘older’ the cell and the greater the biological age of the person being tested. They also looked at the activity of telomerase, a protein which protects the end of chromosomes from DNA

The regular exercise that football represents induces cellular anti-senescence mechanisms implying positive long-term cardiovascular health damage, contributing to the protective effect regular exercise has on the body. The study, which was based on 140 men, showed that those aged 65 to 80 years – who had played football regularly – had longer telomeres than their inactive counterparts. Longer telomeres The elderly footballers had 2.5 per cent higher granulocyte telomere length and 1.3 per cent higher lymphocyte telomere length when compared to inactive men of the same age. The footballers also had 37 per cent lower mRNA expression of the pro-senescent factor p16 (a cellular senescence and tumour suppressor gene), when compared to those in the study who were inactive, as well as higher telomerase activity.

Great outcome “The older football players were in excellent physical shape, which was manifested in the younger biological age in the cells,” said Peter Krustrup, professor at the Department of Sports Science and Clinical Biomechanics at University of Southern Denmark, which led the study. “This is the first cross-sectional, controlled trial showing the effects of lifelong football participation on telomere shortening and senescence markers in circulating cells. “It suggests that the regular exercise football represents induces cellular antisenescence mechanisms, giving positive long-term cardiovascular health effects and protection against cell ageing.” Find out more about this research at: www.HCMmag.com/football