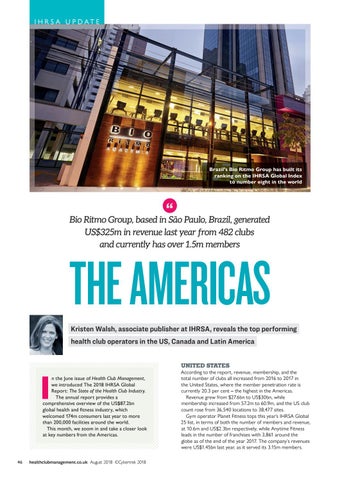 Bio Ritmo Group, based in São Paulo, Brazil, generated US$325m in revenue last year from 482 clubs and currently has over 1.5m members

Kristen Walsh, associate publisher at IHRSA, reveals the top performing health club operators in the US, Canada and Latin America

n the June issue of Health Club Management, we introduced The 2018 IHRSA Global Report: The State of the Health Club Industry. The annual report provides a comprehensive overview of the US$87.2bn global health and fitness industry, which welcomed 174m consumers last year to more than 200,000 facilities around the world. This month, we zoom in and take a closer look at key numbers from the Americas.

UNITED STATES According to the report, revenue, membership, and the total number of clubs all increased from 2016 to 2017 in the United States, where the member penetration rate is currently 20.3 per cent – the highest in the Americas. Revenue grew from $27.6bn to US$30bn, while membership increased from 57.2m to 60.9m, and the US club count rose from 36,540 locations to 38,477 sites. Gym operator Planet Fitness tops this year’s IHRSA Global 25 list, in terms of both the number of members and revenue, at 10.6m and US$2.3bn respectively, while Anytime Fitness leads in the number of franchises with 3,861 around the globe as of the end of the year 2017. The company’s revenues were US$1.45bn last year, as it served its 3.15m members.