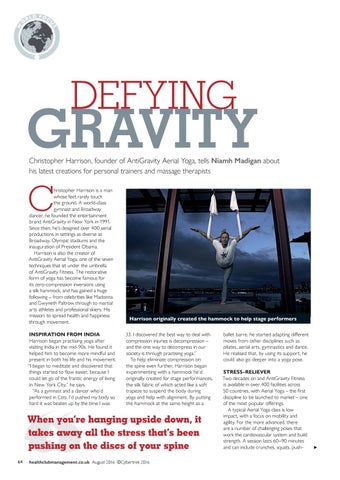 hristopher Harrison is a man whose feet rarely touch the ground. A world-class gymnast and Broadway dancer, he founded the entertainment brand AntiGravity in New York in 1991. Since then, he’s designed over 400 aerial productions in settings as diverse as Broadway, Olympic stadiums and the inauguration of President Obama. Harrison is also the creator of AntiGravity Aerial Yoga, one of the seven techniques that sit under the umbrella of AntiGravity Fitness. The restorative form of yoga has become famous for its zero-compression inversions using a silk hammock, and has gained a huge following – from celebrities like Madonna and Gwyneth Paltrow through to martial arts athletes and professional skiers. His mission: to spread health and happiness through movement.

INSPIRATION FROM INDIA Harrison began practising yoga after visiting India in the mid-90s. He found it helped him to become more mindful and present in both his life and his movement. “I began to meditate and discovered that things started to flow easier, because I could let go of the frantic energy of living in New York City,” he says. “As a gymnast and a dancer who’d performed in Cats, I’d pushed my body so hard it was beaten up by the time I was

Harrison originally created the hammock to help stage performers 33. I discovered the best way to deal with compression injuries is decompression – and the one way to decompress in our society is through practising yoga.” To help eliminate compression on the spine even further, Harrison began experimenting with a hammock he’d originally created for stage performances, the silk fabric of which acted like a soft trapeze to suspend the body during yoga and help with alignment. By putting the hammock at the same height as a

When you’re hanging upside down, it takes away all the stress that’s been pushing on the discs of your spine 64

ballet barre, he started adapting diﬀerent moves from other disciplines such as pilates, aerial arts, gymnastics and dance. He realised that, by using its support, he could also go deeper into a yoga pose. STRESS-RELIEVER Two decades on and AntiGravity Fitness is available in over 400 facilities across 50 countries, with Aerial Yoga – the first discipline to be launched to market – one of the most popular oﬀerings. A typical Aerial Yoga class is low impact, with a focus on mobility and agility. For the more advanced, there are a number of challenging poses that work the cardiovascular system and build strength. A session lasts 60–90 minutes and can include crunches, squats, push-