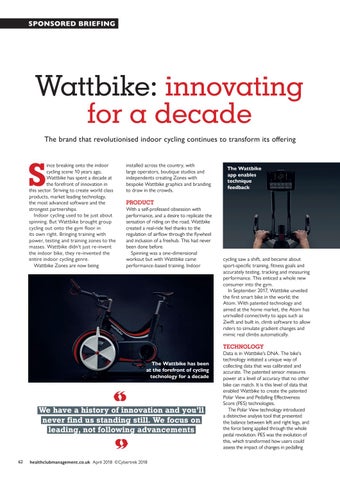 Wattbike: innovating for a decade The brand that revolutionised indoor cycling continues to transform its oﬀering

ince breaking onto the indoor cycling scene 10 years ago, Wattbike has spent a decade at the forefront of innovation in this sector. Striving to create world class products, market leading technology, the most advanced software and the strongest partnerships. Indoor cycling used to be just about spinning. But Wattbike brought group cycling out onto the gym fl oor in its own right. Bringing training with power, testing and training zones to the masses. Wattbike didn’t just re-invent the indoor bike, they re-invented the entire indoor cycling genre. Wattbike Zones are now being

installed across the country, with large operators, boutique studios and independents creating Zones with bespoke Wattbike graphics and branding to draw in the crowds.

PRODUCT With a self-professed obsession with performance, and a desire to replicate the sensation of riding on the road, Wattbike created a real-ride feel thanks to the regulation of airflow through the flywheel and inclusion of a freehub. This had never been done before. Spinning was a one-dimensional workout but with Wattbike came performance-based training. Indoor

cycling saw a shift, and became about sport-specific training, fitness goals and accurately testing, tracking and measuring performance. This enticed a whole new consumer into the gym. In September 2017, Wattbike unveiled the first smart bike in the world; the Atom. With patented technology and aimed at the home market, the Atom has unrivalled connectivity to apps such as Zwift and built in, climb software to allow riders to simulate gradient changes and mimic real climbs automatically.

We have a history of innovation and you’ll never find us standing still. We focus on leading, not following advancements

Data is in Wattbike&#39;s DNA. The bike&#39;s technology initiated a unique way of collecting data that was calibrated and accurate. The patented sensor measures power at a level of accuracy that no other bike can match. It is this level of data that enabled Wattbike to create the patented Polar View and Pedalling Eﬀectiveness Score (PES) technologies. The Polar View technology introduced a distinctive analysis tool that presented the balance between left and right legs, and the force being applied through the whole pedal revolution. PES was the evolution of this, which transformed how users could assess the impact of changes in pedalling