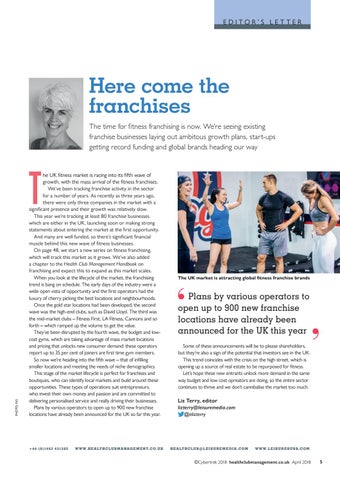 he UK fitness market is racing into its fifth wave of growth, with the mass arrival of the fitness franchises.

We’ve been tracking franchise activity in the sector for a number of years. As recently as three years ago, there were only three companies in the market with a significant presence and their growth was relatively slow. This year we’re tracking at least 80 franchise businesses which are either in the UK, launching soon or making strong statements about entering the market at the first opportunity. And many are well funded, so there’s significant financial muscle behind this new wave of fitness businesses. On page 48, we start a new series on fitness franchising, which will track this market as it grows. We’ve also added a chapter to the Health Club Management Handbook on franchising and expect this to expand as this market scales. When you look at the lifecycle of the market, the franchising trend is bang on schedule. The early days of the industry were a wide open vista of opportunity and the first operators had the luxury of cherry picking the best locations and neighbourhoods. Once the gold star locations had been developed, the second wave was the high-end clubs, such as David Lloyd. The third was the mid-market clubs – Fitness First, LA Fitness, Cannons and so forth – which ramped up the volume to get the value. They’ve been disrupted by the fourth wave, the budget and lowcost gyms, which are taking advantage of mass market locations and pricing that unlocks new consumer demand: these operators report up to 35 per cent of joiners are first time gym members. So now we’re heading into the fifth wave – that of infilling smaller locations and meeting the needs of niche demographics. This stage of the market lifecycle is perfect for franchises and boutiques, who can identify local markets and build around these opportunities. These types of operations suit entrepreneurs, who invest their own money and passion and are committed to delivering personalised service and really driving their businesses. Plans by various operators to open up to 900 new franchise locations have already been announced for the UK so far this year.

Plans by various operators to open up to 900 new franchise locations have already been announced for the UK this year Some of these announcements will be to please shareholders, but they’re also a sign of the potential that investors see in the UK. This trend coincides with the crisis on the high street, which is opening up a source of real estate to be repurposed for fitness. Let’s hope these new entrants unlock more demand in the same way budget and low cost opreators are doing, so the entire sector continues to thrive and we don’t cannibalise the market too much.