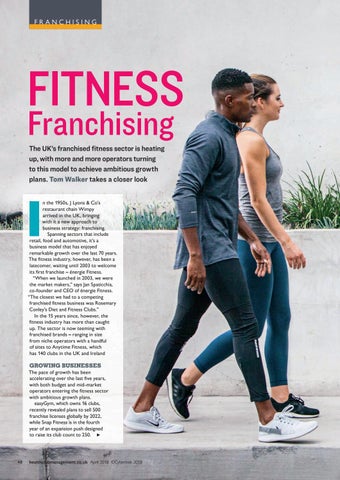 FITNESS Franchising The UK’s franchised fitness sector is heating up, with more and more operators turning to this model to achieve ambitious growth plans. Tom Walker takes a closer look

n the 1950s, J Lyons & Co’s restaurant chain Wimpy arrived in the UK, bringing with it a new approach to business strategy: franchising. Spanning sectors that include retail, food and automotive, it’s a business model that has enjoyed remarkable growth over the last 70 years. The fitness industry, however, has been a latecomer, waiting until 2003 to welcome its first franchise – énergie Fitness. “When we launched in 2003, we were the market makers,” says Jan Spaticchia, co-founder and CEO of énergie Fitness. “The closest we had to a competing franchised fitness business was Rosemary Conley’s Diet and Fitness Clubs.” In the 15 years since, however, the fitness industry has more than caught up. The sector is now teeming with franchised brands – ranging in size from niche operators with a handful of sites to Anytime Fitness, which has 140 clubs in the UK and Ireland

GROWING BUSINESSES The pace of growth has been accelerating over the last five years, with both budget and mid-market operators entering the fitness sector with ambitious growth plans. easyGym, which owns 16 clubs, recently revealed plans to sell 500 franchise licenses globally by 2022, while Snap Fitness is in the fourth year of an expansion push designed to raise its club count to 250.