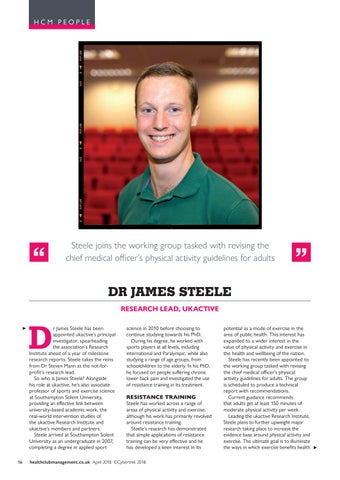 r James Steele has been appointed ukactive’s principal investigator, spearheading the association’s Research Institute ahead of a year of milestone research reports. Steele takes the reins from Dr Steven Mann as the not-forprofi t’s research lead. So who is James Steele? Alongside his role at ukactive, he’s also associate professor of sports and exercise science at Southampton Solent University, providing an eﬀective link between university-based academic work, the real-world intervention studies of the ukactive Research Institute and ukactive’s members and partners. Steele arrived at Southampton Solent University as an undergraduate in 2007, completing a degree in applied sport

science in 2010 before choosing to continue studying towards his PhD. During his degree, he worked with sports players at all levels, including international and Paralympic, while also studying a range of age groups, from schoolchildren to the elderly. In his PhD, he focused on people suﬀering chronic lower back pain and investigated the use of resistance training in its treatment.

Steele has worked across a range of areas of physical activity and exercise, although his work has primarily revolved around resistance training. Steele’s research has demonstrated that simple applications of resistance training can be very eﬀective and he has developed a keen interest in its

potential as a mode of exercise in the area of public health. This interest has expanded to a wider interest in the value of physical activity and exercise in the health and wellbeing of the nation. Steele has recently been appointed to the working group tasked with revising the chief medical oﬃcer’s physical activity guidelines for adults. The group is scheduled to produce a technical report with recommendations. Current guidance recommends that adults get at least 150 minutes of moderate physical activity per week. Leading the ukactive Research Institute, Steele plans to further upweight major research taking place to increase the evidence base around physical activity and exercise. The ultimate goal is to illuminate the ways in which exercise benefits health.