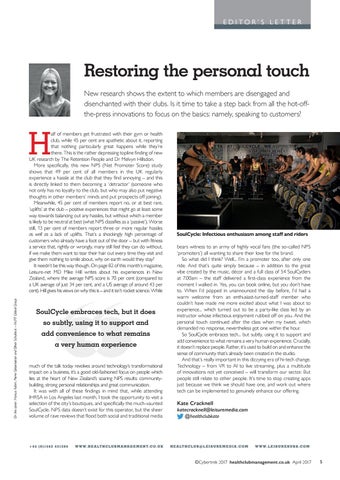 Restoring the personal touch New research shows the extent to which members are disengaged and disenchanted with their clubs. Is it time to take a step back from all the hot-offthe-press innovations to focus on the basics: namely, speaking to customers?

alf of members get frustrated with their gym or health club, while 45 per cent are apathetic about it, reporting that nothing particularly great happens while they’re there. This is the rather depressing topline finding of new UK research by The Retention People and Dr Melvyn Hillsdon. More specifically, this new NPS (Net Promoter Score) study shows that 49 per cent of all members in the UK regularly experience a hassle at the club that they find annoying – and this is directly linked to them becoming a ‘detractor’ (someone who not only has no loyalty to the club, but who may also put negative thoughts in other members’ minds and put prospects off joining). Meanwhile, 45 per cent of members report no, or at best rare, ‘uplifts’ at the club – positive experiences that might go at least some way towards balancing out any hassles, but without which a member is likely to be neutral at best (what NPS classifies as a ‘passive’). Worse still, 13 per cent of members report three or more regular hassles as well as a lack of uplifts. That’s a shockingly high percentage of customers who already have a foot out of the door – but with fitness a service that, rightly or wrongly, many still feel they can do without, if we make them want to tear their hair out every time they visit and give them nothing to smile about, why on earth would they stay? It needn’t be this way though. On page 82 of this month’s magazine, Leisure-net MD Mike Hill writes about his experiences in New Zealand, where the average NPS score is 70 per cent (compared to a UK average of just 34 per cent, and a US average of around 43 per cent). Hill gives his views on why this is – and it isn’t rocket science. While

SoulCycle embraces tech, but it does so subtly, using it to support and add convenience to what remains a very human experience much of the talk today revolves around technology’s transformational impact on a business, it’s a good old-fashioned focus on people which lies at the heart of New Zealand’s soaring NPS results: communitybuilding, strong personal relationships and great communication. It was with all of these findings in mind that, while attending IHRSA in Los Angeles last month, I took the opportunity to visit a selection of the city’s boutiques, and specifically the much-vaunted SoulCycle. NPS data doesn’t exist for this operator, but the sheer volume of rave reviews that flood both social and traditional media

SoulCycle: Infectious enthusiasm among staff and riders bears witness to an army of highly vocal fans (the so-called NPS ‘promoters’) all wanting to share their love for the brand. So what did I think? Well... I’m a promoter too, after only one ride. And that’s quite simply because – in addition to the great vibe created by the music, décor and a full class of 54 SoulCyclers at 7.00am – the staff delivered a first-class experience from the moment I walked in. Yes, you can book online, but you don’t have to. When I’d popped in unannounced the day before, I’d had a warm welcome from an enthusiast-turned-staff member who couldn’t have made me more excited about what I was about to experience... which turned out to be a party-like class led by an instructor whose infectious enjoyment rubbed off on you. And the personal touch continued after the class when my tweet, which demanded no response, nevertheless got one within the hour. So SoulCycle embraces tech... but subtly, using it to support and add convenience to what remains a very human experience. Crucially, it doesn’t replace people. Rather, it’s used to build on and enhance the sense of community that’s already been created in the studio. And that’s really important in this dizzying era of hi-tech change. Technology – from VR to AI to live streaming, plus a multitude of innovations not yet conceived – will transform our sector. But people still relate to other people. It’s time to stop creating apps just because we think we should have one, and work out where tech can be implemented to genuinely enhance our offering.