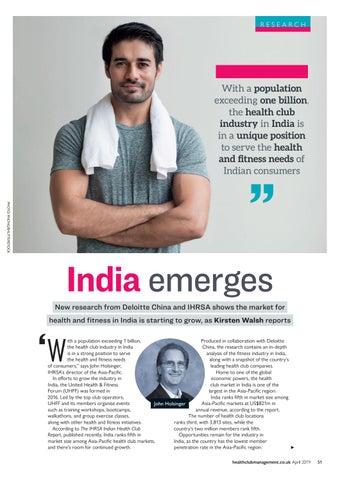 With a population exceeding one billion, the health club industry in India is in a unique position to serve the health and fitness needs of Indian consumers

New research from Deloitte China and IHRSA shows the market for health and fitness in India is starting to grow, as Kirsten Walsh reports

Produced in collaboration with Deloitte ith a population exceeding 1 billion, China, the research contains an in-depth the health club industry in India analysis of the fitness industry in India, is in a strong position to serve along with a snapshot of the country’s the health and fitness needs leading health club companies. of consumers,” says John Holsinger, Home to one of the global IHRSA’s director of the Asia-Pacific. economic powers, the health In efforts to grow the industry in club market in India is one of the India, the United Health & Fitness largest in the Asia-Pacific region. Forum (UHFF) was formed in India ranks fifth in market size among 2016. Led by the top club operators, Asia-Pacific markets at US$821m in UHFF and its members organise events John Holsinger annual revenue, according to the report. such as training workshops, bootcamps, The number of health club locations walkathons, and group exercise classes, ranks third, with 3,813 sites, while the along with other health and fitness initiatives. country’s two million members rank fifth. According to The IHRSA Indian Health Club Opportunities remain for the industry in Report, published recently, India ranks fifth in India, as the country has the lowest member market size among Asia-Pacific health club markets, penetration rate in the Asia-Pacific region. and there’s room for continued growth. healthclubmanagement.co.uk April 2019