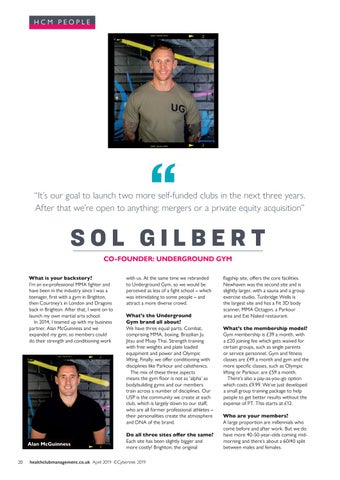 “It’s our goal to launch two more self-funded clubs in the next three years. After that we’re open to anything: mergers or a private equity acquisition”

SOL GILBERT CO-FOUNDER: UNDERGROUND GYM What is your backstory? I’m an ex-professional MMA fighter and have been in the industry since I was a teenager, first with a gym in Brighton, then Courtney’s in London and Dragons back in Brighton. After that, I went on to launch my own martial arts school. In 2014, I teamed up with my business partner, Alan McGuinness and we expanded my gym, so members could do their strength and conditioning work

with us. At the same time we rebranded to Underground Gym, so we would be perceived as less of a fight school – which was intimidating to some people – and attract a more diverse crowd. What’s the Underground Gym brand all about? We have three equal parts. Combat, comprising MMA, boxing, Brazilian Ju Jitsu and Muay Thai. Strength training with free weights and plate loaded equipment and power and Olympic lifting. Finally, we oﬀer conditioning with disciplines like Parkour and calisthenics. The mix of these three aspects means the gym floor is not as ‘alpha’ as bodybuilding gyms and our members train across a number of disciplines. Our USP is the community we create at each club, which is largely down to our staﬀ, who are all former professional athletes – their personalities create the atmosphere and DNA of the brand. Do all three sites oﬀer the same? Each site has been slightly bigger and more costly! Brighton, the original

flagship site, oﬀers the core facilities. Newhaven was the second site and is slightly larger, with a sauna and a group exercise studio. Tunbridge Wells is the largest site and has a Fit 3D body scanner, MMA Octagon, a Parkour area and Eat Naked restaurant. What’s the membership model? Gym membership is £39 a month, with a £20 joining fee which gets waived for certain groups, such as single parents or service personnel. Gym and fitness classes are £49 a month and gym and the more specific classes, such as Olympic lifting or Parkour, are £59 a month. There’s also a pay-as-you-go option which costs £9.99. We’ve just developed a small group training package to help people to get better results without the expense of PT. This starts at £12. Who are your members? A large proportion are millennials who come before and after work. But we do have more 40-50-year-olds coming midmorning and there’s about a 60/40 split between males and females.