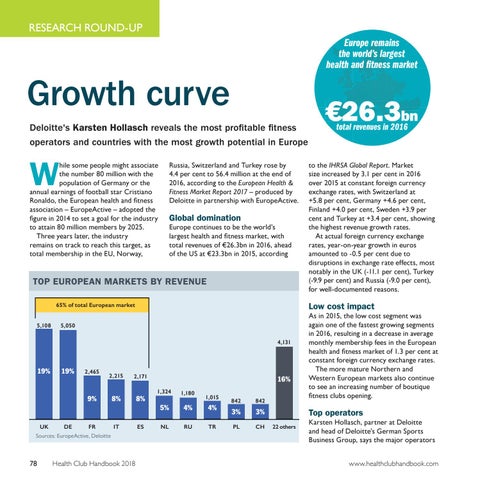 hile some people might associate the number 80 million with the population of Germany or the annual earnings of football star Cristiano Ronaldo, the European health and ﬁtness association – EuropeActive – adopted the ﬁgure in 2014 to set a goal for the industry to attain 80 million members by 2025. Three years later, the industry remains on track to reach this target, as total membership in the EU, Norway,

Russia, Switzerland and Turkey rose by 4.4 per cent to 56.4 million at the end of 2016, according to the European Health & Fitness Market Report 2017 – produced by Deloitte in partnership with EuropeActive.

Global domination Europe continues to be the world’s largest health and ﬁtness market, with total revenues of €26.3bn in 2016, ahead of the US at €23.3bn in 2015, according

to the IHRSA Global Report. Market size increased by 3.1 per cent in 2016 over 2015 at constant foreign currency exchange rates, with Switzerland at +5.8 per cent, Germany +4.6 per cent, Finland +4.0 per cent, Sweden +3.9 per cent and Turkey at +3.4 per cent, showing the highest revenue growth rates. At actual foreign currency exchange rates, year-on-year growth in euros amounted to -0.5 per cent due to disruptions in exchange rate effects, most notably in the UK (-11.1 per cent), Turkey (-9.9 per cent) and Russia (-9.0 per cent), for well-documented reasons.

As in 2015, the low cost segment was again one of the fastest growing segments in 2016, resulting in a decrease in average monthly membership fees in the European health and ﬁtness market of 1.3 per cent at constant foreign currency exchange rates. The more mature Northern and Western European markets also continue to see an increasing number of boutique ﬁtness clubs opening.