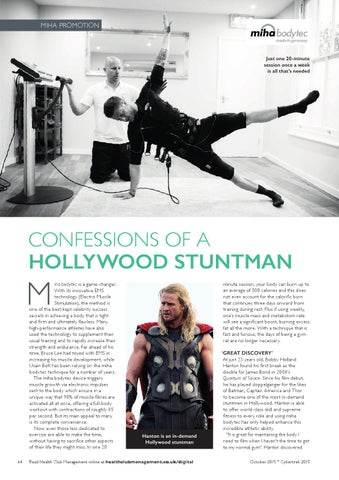 Confessions of a Hollywood Stuntman

iha bodytec is a game-changer. With its innovative EMS technology (Electro Muscle Stimulation), the method is one of the best-kept celebrity success secrets in achieving a body that is tight and firm and ultimately flawless. Many high-performance athletes have also used the technology to supplement their usual training and to rapidly increase their strength and endurance. Far ahead of his time, Bruce Lee had toyed with EMS in increasing his muscle development, while Usain Bolt has been relying on the miha bodytec technique for a number of years. The miha bodytec device triggers muscle growth via electronic impulses sent to the body which ensure in a unique way that 90% of muscle fibres are activated all at once, offering a full-body workout with contractions of roughly 85 per second. But its main appeal to many is its complete convenience. Now even those less dedicated to exercise are able to make the time, without having to sacrifice other aspects of their life they might miss. In one 20

minute session, your body can burn up to an average of 500 calories and this does not even account for the calorific burn that continues three days onward from training during rest. Plus if using weekly, one’s muscle mass and metabolism rate will see a significant boost, burning excess fat all the more. With a technique that is fast and furious, the days of being a gym rat are no longer necessary.

Hanton is an in-demand Hollywood stuntman

‘Great discovery’ At just 23 years old, Bobby Holland Hanton found his first break as the double for James Bond in 2008’s Quantum of Solace. Since his film debut, he has played doppelgänger for the likes of Batman, Captain America and Thor to become one of the most in-demand stuntmen in Hollywood. Hanton is able to offer world-class skill and supreme fitness to every role and using miha bodytec has only helped enhance this incredible athletic ability. “It is great for maintaining the body I need to film when I haven’t the time to get to my normal gym”. Hanton discovered October 2015 © Cybertrek 2015