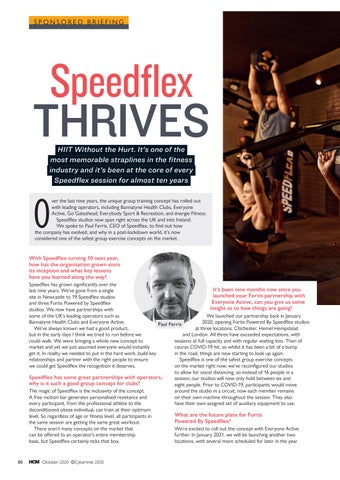 Speedflex THRIVES HIIT Without the Hurt. It’s one of the most memorable straplines in the fitness industry and it’s been at the core of every Speedflex session for almost ten years

ver the last nine years, the unique group training concept has rolled out with leading operators, including Bannatyne Health Clubs, Everyone Active, Go Gateshead, Everybody Sport & Recreation, and énergie Fitness. Speedflex studios now span right across the UK and into Ireland. We spoke to Paul Ferris, CEO of Speedflex, to find out how the company has evolved, and why in a post-lockdown world, it’s now considered one of the safest group exercise concepts on the market.

With Speedflex turning 10 next year, how has the organisation grown since its inception and what key lessons have you learned along the way? Speedflex has grown significantly over the It’s been nine months now since you last nine years. We’ve gone from a single launched your Fortis partnership with site in Newcastle to 19 Speedflex studios Everyone Active, can you give us some and three Fortis Powered by Speedflex insight as to how things are going? studios. We now have partnerships with some of the UK’s leading operators such as We launched our partnership back in January Bannatyne Health Clubs and Everyone Active. 2020, opening Fortis Powered By Speedflex studios Paul Ferris We’ve always known we had a good product, at three locations; Chichester, Hemel Hempstead but in the early days I think we tried to run before we and London. All three have exceeded expectations, with could walk. We were bringing a whole new concept to sessions at full capacity and with regular waiting lists. Then of market and yet we just assumed everyone would instantly course COVID-19 hit, so whilst it has been a bit of a bump get it. In reality we needed to put in the hard work, build key in the road, things are now starting to look up again. relationships and partner with the right people to ensure Speedflex is one of the safest group exercise concepts we could get Speedflex the recognition it deserves. on the market right now; we’ve reconfigured our studios to allow for social distancing, so instead of 16 people in a Speedflex has some great partnerships with operators, session, our studios will now only hold between six and why is it such a good group concept for clubs? eight people. Prior to COVID-19, participants would move around the studio in a circuit, now each member remains The magic of Speedflex is the inclusivity of the concept. on their own machine throughout the session. They also A free motion bar generates personalised resistance and have their own assigned set of auxiliary equipment to use. every participant, from the professional athlete to the deconditioned obese individual, can train at their optimum What are the future plans for Fortis level. So regardless of age or fitness level, all participants in Powered By Speedflex? the same session are getting the same great workout. There aren’t many concepts on the market that We’re excited to roll out the concept with Everyone Active can be offered to an operator’s entire membership further. In January 2021, we will be launching another two base, but Speedflex certainly ticks that box. locations, with several more scheduled for later in the year.