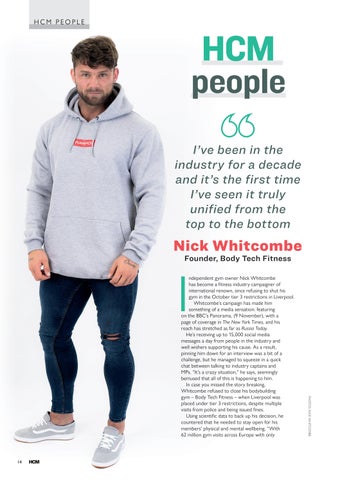 ndependent gym owner Nick Whitcombe has become a fitness industry campaigner of international renown, since refusing to shut his gym in the October tier 3 restrictions in Liverpool. Whitcombe’s campaign has made him something of a media sensation: featuring on the BBC’s Panorama, (9 November), with a page of coverage in The New York Times, and his reach has stretched as far as Russia Today. He’s receiving up to 15,000 social media messages a day from people in the industry and well wishers supporting his cause. As a result, pinning him down for an interview was a bit of a challenge, but he managed to squeeze in a quick chat between talking to industry captains and MPs. “It’s a crazy situation,” he says, seemingly bemused that all of this is happening to him. In case you missed the story breaking, Whitcombe refused to close his bodybuilding gym – Body Tech Fitness – when Liverpool was placed under tier 3 restrictions, despite multiple visits from police and being issued fines. Using scientific data to back up his decision, he countered that he needed to stay open for his members’ physical and mental wellbeing. “With 62 million gym visits across Europe with only