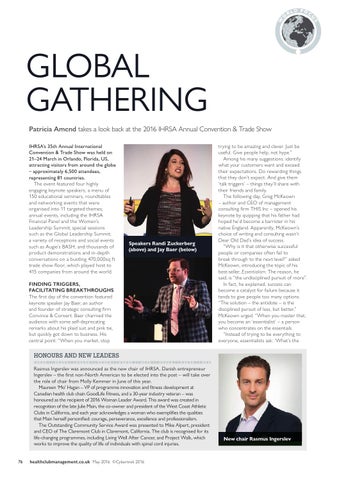 GLOBAL GATHERING Patricia Amend takes a look back at the 2016 IHRSA Annual Convention & Trade Show IHRSA’s 35th Annual International Convention & Trade Show was held on 21–24 March in Orlando, Florida, US, attracting visitors from around the globe – approximately 6,500 attendees, representing 81 countries. The event featured four highly engaging keynote speakers; a menu of 150 educational seminars, roundtables and networking events that were organised into 11 targeted themes; annual events, including the IHRSA Financial Panel and the Women’s Leadership Summit; special sessions such as the Global Leadership Summit; a variety of receptions and social events such as Augie’s BASH; and thousands of product demonstrations and in-depth conversations on a bustling 470,000sq ft trade show fl oor, which played host to 415 companies from around the world.

Speakers Randi Zuckerberg (above) and Jay Baer (below)

FINDING TRIGGERS, FACILITATING BREAKTHROUGHS The first day of the convention featured keynote speaker Jay Baer, an author and founder of strategic consulting firm Convince & Convert. Baer charmed the audience with some self-deprecating remarks about his plaid suit and pink tie, but quickly got down to business. His central point: “When you market, stop

trying to be amazing and clever. Just be useful. Give people help, not hype.” Among his many suggestions: identify what your customers want and exceed their expectations. Do rewarding things that they don’t expect. And give them ‘talk triggers’ – things they’ll share with their friends and family. The following day, Greg McKeown – author and CEO of management consulting firm THIS Inc – opened his keynote by quipping that his father had hoped he’d become a barrister in his native England. Apparently, McKeown’s choice of writing and consulting wasn’t Dear Old Dad’s idea of success. “Why is it that otherwise successful people or companies often fail to break through to the next level?” asked McKeown, introducing the topic of his best-seller, Essentialism. The reason, he said, is “the undisciplined pursuit of more”. In fact, he explained, success can become a catalyst for failure because it tends to give people too many options. “The solution – the antidote – is the disciplined pursuit of less, but better,” McKeown urged. “When you master that, you become an ‘essentialist’ – a person who concentrates on the essentials. “Instead of trying to be everything to everyone, essentialists ask: ‘What’s the

HONOURS AND NEW LEADERS Rasmus Ingerslev was announced as the new chair of IHRSA. Danish entrepreneur Ingerslev – the first non-North American to be elected into the post – will take over the role of chair from Molly Kemmer in June of this year. Maureen ‘Mo’ Hagan – VP of programme innovation and fitness development at Canadian health club chain GoodLife Fitness, and a 30-year industry veteran – was honoured as the recipient of 2016 Woman Leader Award. This award was created in recognition of the late Julie Main, the co-owner and president of the West Coast Athletic Clubs in California, and each year acknowledges a woman who exemplifies the qualities that Main herself personified: courage, perseverance, excellence and professionalism. The Outstanding Community Service Award was presented to Mike Alpert, president and CEO of The Claremont Club in Claremont, California. The club is recognised for its life-changing programmes, including Living Well After Cancer, and Project Walk, which works to improve the quality of life of individuals with spinal cord injuries. 76