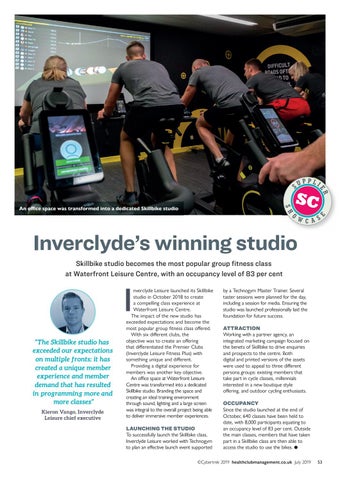 An oﬃce space was transformed into a dedicated Skillbike studio

Inverclyde’s winning studio Skillbike studio becomes the most popular group fitness class at Waterfront Leisure Centre, with an occupancy level of 83 per cent

“The Skillbike studio has exceeded our expectations on multiple fronts: it has created a unique member experience and member demand that has resulted in programming more and more classes” Kieron Vango, Inverclyde Leisure chief executive

nverclyde Leisure launched its Skillbike studio in October 2018 to create a compelling class experience at Waterfront Leisure Centre. The impact of the new studio has exceeded expectations and become the most popular group fitness class oﬀered. With six diﬀerent clubs, the objective was to create an oﬀering that diﬀerentiated the Premier Clubs (Inverclyde Leisure Fitness Plus) with something unique and diﬀerent. Providing a digital experience for members was another key objective. An oﬃce space at Waterfront Leisure Centre was transformed into a dedicated Skillbike studio. Branding the space and creating an ideal training environment through sound, lighting and a large screen was integral to the overall project being able to deliver immersive member experiences.

by a Technogym Master Trainer. Several taster sessions were planned for the day, including a session for media. Ensuring the studio was launched professionally laid the foundation for future success.

Working with a partner agency, an integrated marketing campaign focused on the benets of Skillbike to drive enquiries and prospects to the centre. Both digital and printed versions of the assets were used to appeal to three diﬀerent persona groups: existing members that take part in cycle classes, millennials interested in a new boutique style oﬀering, and outdoor cycling enthusiasts.

Since the studio launched at the end of October, 640 classes have been held to date, with 8,000 participants equating to an occupancy level of 83 per cent. Outside the main classes, members that have taken part in a Skillbike class are then able to access the studio to use the bikes. ●