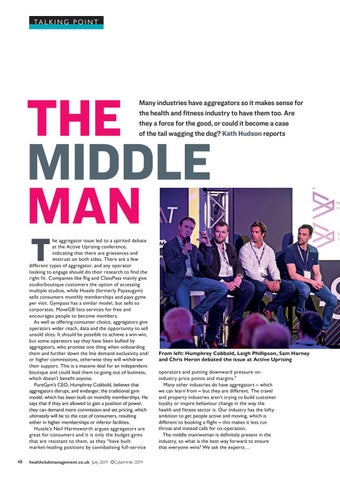 Many industries have aggregators so it makes sense for the health and fitness industry to have them too. Are they a force for the good, or could it become a case of the tail wagging the dog? Kath Hudson reports

he aggregator issue led to a spirited debate at the Active Uprising conference, indicating that there are grievances and mistrust on both sides. There are a few different types of aggregator, and any operator looking to engage should do their research to find the right fit. Companies like Rig and ClassPass mainly give studio/boutique customers the option of accessing multiple studios, while Hussle (formerly Payasugym) sells consumers monthly memberships and pays gyms per visit. Gympass has a similar model, but sells to corporates. MoveGB lists services for free and encourages people to become members. As well as offering consumer choice, aggregators give operators wider reach, data and the opportunity to sell unsold slots. It should be possible to achieve a win-win, but some operators say they have been bullied by aggregators, who promise one thing when onboarding them and further down the line demand exclusivity and/ or higher commissions, otherwise they will withdraw their support. This is a massive deal for an independent boutique and could lead them to going out of business, which doesn’t benefit anyone. PureGym’s CEO, Humphrey Cobbold, believes that aggregators disrupt, and endanger, the traditional gym model, which has been built on monthly memberships. He says that if they are allowed to gain a position of power, they can demand more commission and set pricing, which ultimately will be to the cost of consumers, resulting either in higher memberships or inferior facilities. Hussle’s Neil Harmsworth argues aggregators are great for consumers and it is only the budget gyms that are resistant to them, as they “have built market-leading positions by cannibalising full-service

From left: Humphrey Cobbold, Leigh Phillipson, Sam Harney and Chris Heron debated the issue at Active Uprising operators and putting downward pressure on industry price points and margins.” Many other industries do have aggregators – which we can learn from – but they are different. The travel and property industries aren’t trying to build customer loyalty or inspire behaviour change in the way the health and fitness sector is. Our industry has the lofty ambition to get people active and moving, which is different to booking a flight – this makes it less cut throat and instead calls for co-operation. The middle man/woman is definitely present in the industry, so what is the best way forward to ensure that everyone wins? We ask the experts…