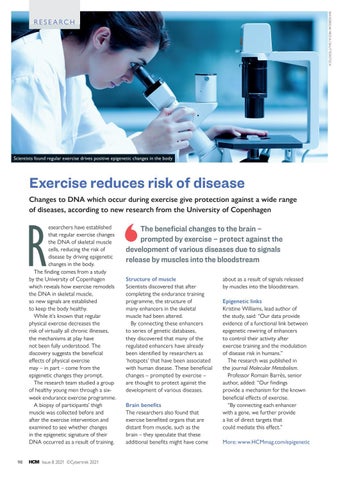 Exercise reduces risk of disease Changes to DNA which occur during exercise give protection against a wide range of diseases, according to new research from the University of Copenhagen

esearchers have established that regular exercise changes the DNA of skeletal muscle cells, reducing the risk of disease by driving epigenetic changes in the body. The finding comes from a study by the University of Copenhagen which reveals how exercise remodels the DNA in skeletal muscle, so new signals are established to keep the body healthy. While it’s known that regular physical exercise decreases the risk of virtually all chronic illnesses, the mechanisms at play have not been fully understood. The discovery suggests the beneficial effects of physical exercise may – in part – come from the epigenetic changes they prompt. The research team studied a group of healthy young men through a sixweek endurance exercise programme. A biopsy of participants’ thigh muscle was collected before and after the exercise intervention and examined to see whether changes in the epigenetic signature of their DNA occurred as a result of training.

The beneficial changes to the brain – prompted by exercise – protect against the development of various diseases due to signals release by muscles into the bloodstream Structure of muscle Scientists discovered that after completing the endurance training programme, the structure of many enhancers in the skeletal muscle had been altered. By connecting these enhancers to series of genetic databases, they discovered that many of the regulated enhancers have already been identified by researchers as ‘hotspots’ that have been associated with human disease. These beneficial changes – prompted by exercise – are thought to protect against the development of various diseases. Brain benefits The researchers also found that exercise benefited organs that are distant from muscle, such as the brain – they speculate that these additional benefits might have come

about as a result of signals released by muscles into the bloodstream. Epigenetic links Kristine Williams, lead author of the study, said: “Our data provide evidence of a functional link between epigenetic rewiring of enhancers to control their activity after exercise training and the modulation of disease risk in humans.” The research was published in the journal Molecular Metabolism. Professor Romain Barrès, senior author, added: “Our findings provide a mechanism for the known beneficial effects of exercise. “By connecting each enhancer with a gene, we further provide a list of direct targets that could mediate this effect.” More: www.HCMmag.com/epigenetic