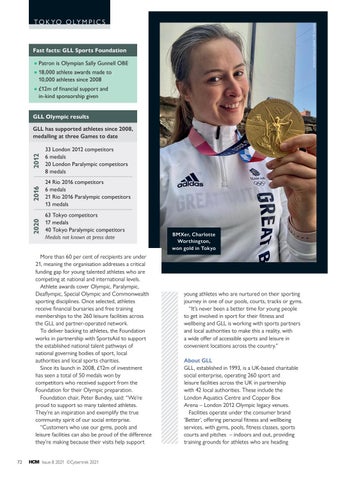 GLL has supported athletes since 2008, medalling at three Games to date

More than 60 per cent of recipients are under 21, meaning the organisation addresses a critical funding gap for young talented athletes who are competing at national and international levels. Athlete awards cover Olympic, Paralympic, Deaflympic, Special Olympic and Commonwealth sporting disciplines. Once selected, athletes receive financial bursaries and free training memberships to the 260 leisure facilities across the GLL and partner-operated network. To deliver backing to athletes, the Foundation works in partnership with SportsAid to support the established national talent pathways of national governing bodies of sport, local authorities and local sports charities. Since its launch in 2008, £12m of investment has seen a total of 50 medals won by competitors who received support from the Foundation for their Olympic preparation. Foundation chair, Peter Bundey, said: “We’re proud to support so many talented athletes. They’re an inspiration and exemplify the true community spirit of our social enterprise. “Customers who use our gyms, pools and leisure facilities can also be proud of the difference they’re making because their visits help support 72

young athletes who are nurtured on their sporting journey in one of our pools, courts, tracks or gyms. “It’s never been a better time for young people to get involved in sport for their fitness and wellbeing and GLL is working with sports partners and local authorities to make this a reality, with a wide offer of accessible sports and leisure in convenient locations across the country.” About GLL GLL, established in 1993, is a UK-based charitable social enterprise, operating 260 sport and leisure facilities across the UK in partnership with 42 local authorities. These include the London Aquatics Centre and Copper Box Arena – London 2012 Olympic legacy venues. Facilities operate under the consumer brand ‘Better’, offering personal fitness and wellbeing services, with gyms, pools, fitness classes, sports courts and pitches – indoors and out, providing training grounds for athletes who are heading