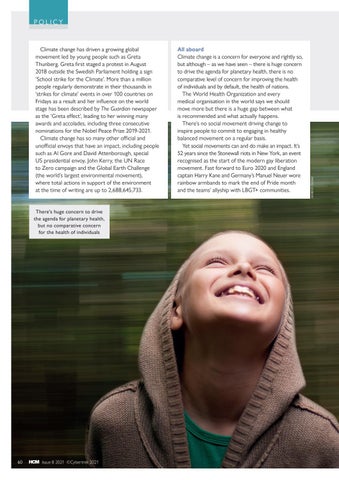 There’s huge concern to drive the agenda for planetary health, but no comparative concern for the health of individuals

All aboard Climate change is a concern for everyone and rightly so, but although – as we have seen – there is huge concern to drive the agenda for planetary health, there is no comparative level of concern for improving the health of individuals and by default, the health of nations. The World Health Organization and every medical organisation in the world says we should move more but there is a huge gap between what is recommended and what actually happens. There’s no social movement driving change to inspire people to commit to engaging in healthy balanced movement on a regular basis. Yet social movements can and do make an impact. It’s 52 years since the Stonewall riots in New York, an event recognised as the start of the modern gay liberation movement. Fast forward to Euro 2020 and England captain Harry Kane and Germany’s Manuel Neuer wore rainbow armbands to mark the end of Pride month and the teams’ allyship with LBGT+ communities.

Climate change has driven a growing global movement led by young people such as Greta Thunberg. Greta first staged a protest in August 2018 outside the Swedish Parliament holding a sign ‘School strike for the Climate’. More than a million people regularly demonstrate in their thousands in ‘strikes for climate’ events in over 100 countries on Fridays as a result and her influence on the world stage has been described by The Guardian newspaper as the ‘Greta effect’, leading to her winning many awards and accolades, including three consecutive nominations for the Nobel Peace Prize 2019-2021. Climate change has so many other official and unofficial envoys that have an impact, including people such as Al Gore and David Attenborough, special US presidential envoy, John Kerry, the UN Race to Zero campaign and the Global Earth Challenge (the world’s largest environmental movement), where total actions in support of the environment at the time of writing are up to 2,688,645,733.