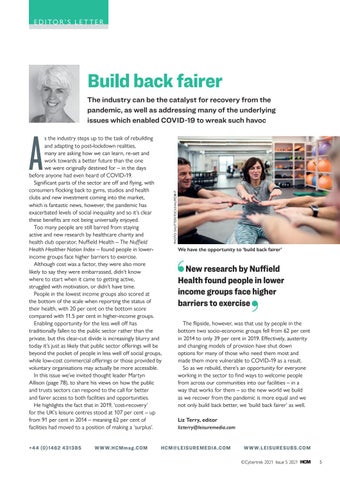 Build back fairer The industry can be the catalyst for recovery from the pandemic, as well as addressing many of the underlying issues which enabled COVID-19 to wreak such havoc

s the industry steps up to the task of rebuilding and adapting to post-lockdown realities, many are asking how we can learn, re-set and work towards a better future than the one we were originally destined for – in the days before anyone had even heard of COVID-19. Significant parts of the sector are off and flying, with consumers flocking back to gyms, studios and health clubs and new investment coming into the market, which is fantastic news, however, the pandemic has exacerbated levels of social inequality and so it’s clear these benefits are not being universally enjoyed. Too many people are still barred from staying active and new research by healthcare charity and health club operator, Nuffield Health – The Nuffield Health Healthier Nation Index – found people in lowerincome groups face higher barriers to exercise. Although cost was a factor, they were also more likely to say they were embarrassed, didn’t know where to start when it came to getting active, struggled with motivation, or didn’t have time. People in the lowest income groups also scored at the bottom of the scale when reporting the status of their health, with 20 per cent on the bottom score compared with 11.5 per cent in higher-income groups. Enabling opportunity for the less well off has traditionally fallen to the public sector rather than the private, but this clear-cut divide is increasingly blurry and today it’s just as likely that public sector offerings will be beyond the pocket of people in less well off social groups, while low-cost commercial offerings or those provided by voluntary organisations may actually be more accessible. In this issue we’ve invited thought leader Martyn Allison (page 78), to share his views on how the public and trusts sectors can respond to the call for better and fairer access to both facilities and opportunities. He highlights the fact that in 2019, ‘cost-recovery’ for the UK’s leisure centres stood at 107 per cent – up from 91 per cent in 2014 – meaning 62 per cent of facilities had moved to a position of making a ‘surplus’.

We have the opportunity to ‘build back fairer’

New research by Nuffield Health found people in lower income groups face higher barriers to exercise The flipside, however, was that use by people in the bottom two socio-economic groups fell from 62 per cent in 2014 to only 39 per cent in 2019. Effectively, austerity and changing models of provision have shut down options for many of those who need them most and made them more vulnerable to COVID-19 as a result. So as we rebuild, there’s an opportunity for everyone working in the sector to find ways to welcome people from across our communities into our facilities – in a way that works for them – so the new world we build as we recover from the pandemic is more equal and we not only build back better, we ‘build back fairer’ as well. Liz Terry, editor lizterry@leisuremedia.com