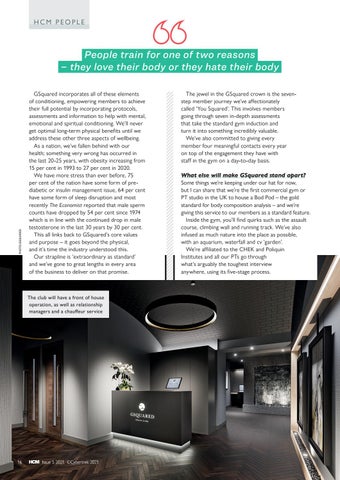 People train for one of two reasons – they love their body or they hate their body GSquared incorporates all of these elements of conditioning, empowering members to achieve their full potential by incorporating protocols, assessments and information to help with mental, emotional and spiritual conditioning. We’ll never get optimal long-term physical benefits until we address these other three aspects of wellbeing. As a nation, we’ve fallen behind with our health; something very wrong has occurred in the last 20-25 years, with obesity increasing from 15 per cent in 1993 to 27 per cent in 2020. We have more stress than ever before, 75 per cent of the nation have some form of prediabetic or insulin management issue, 64 per cent have some form of sleep disruption and most recently The Economist reported that male sperm counts have dropped by 54 per cent since 1974 which is in line with the continued drop in male testosterone in the last 30 years by 30 per cent. This all links back to GSquared’s core values and purpose – it goes beyond the physical, and it’s time the industry understood this.  Our strapline is ‘extraordinary as standard’ and we’ve gone to great lengths in every area of the business to deliver on that promise.

The club will have a front of house operation, as well as relationship managers and a chauffeur service

The jewel in the GSquared crown is the sevenstep member journey we’ve affectionately called ‘You Squared’. This involves members going through seven in-depth assessments that take the standard gym induction and turn it into something incredibly valuable. We’ve also committed to giving every member four meaningful contacts every year on top of the engagement they have with staff in the gym on a day-to-day basis.

What else will make GSquared stand apart? Some things we’re keeping under our hat for now, but I can share that we’re the first commercial gym or PT studio in the UK to house a Bod Pod – the gold standard for body composition analysis – and we’re giving this service to our members as a standard feature. Inside the gym, you’ll find quirks such as the assault course, climbing wall and running track. We’ve also infused as much nature into the place as possible, with an aquarium, waterfall and cv ‘garden’. We’re affiliated to the CHEK and Poliquin Institutes and all our PTs go through what’s arguably the toughest interview anywhere, using its five-stage process.