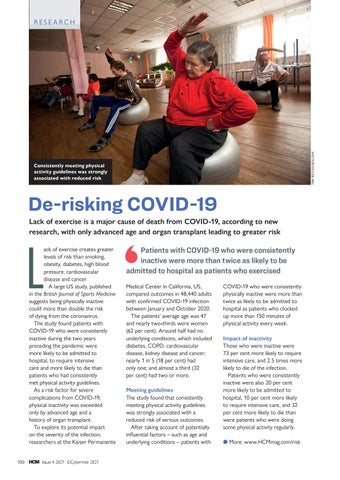 Lack of exercise is a major cause of death from COVID-19, according to new research, with only advanced age and organ transplant leading to greater risk

ack of exercise creates greater levels of risk than smoking, obesity, diabetes, high blood pressure, cardiovascular disease and cancer. A large US study, published in the British Journal of Sports Medicine suggests being physically inactive could more than double the risk of dying from the coronavirus. The study found patients with COVID-19 who were consistently inactive during the two years preceding the pandemic were more likely to be admitted to hospital, to require intensive care and more likely to die than patients who had consistently met physical activity guidelines. As a risk factor for severe complications from COVID-19, physical inactivity was exceeded only by advanced age and a history of organ transplant. To explore its potential impact on the severity of the infection, researchers at the Kaiser Permanente

Patients with COVID-19 who were consistently inactive were more than twice as likely to be admitted to hospital as patients who exercised Medical Center in California, US, compared outcomes in 48,440 adults with confirmed COVID-19 infection between January and October 2020. The patients’ average age was 47 and nearly two-thirds were women (62 per cent). Around half had no underlying conditions, which included diabetes, COPD, cardiovascular disease, kidney disease and cancer; nearly 1 in 5 (18 per cent) had only one; and almost a third (32 per cent) had two or more. Meeting guidelines The study found that consistently meeting physical activity guidelines was strongly associated with a reduced risk of serious outcomes. After taking account of potentially influential factors – such as age and underlying conditions – patients with