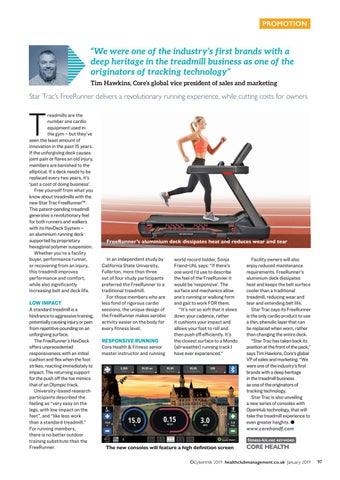 “We were one of the industry’s first brands with a deep heritage in the treadmill business as one of the originators of tracking technology” Tim Hawkins, Core’s global vice president of sales and marketing

readmills are the number one cardio equipment used in the gym – but they’ve seen the least amount of innovation in the past 15 years. If the unforgiving deck causes joint pain or flares an old injury, members are banished to the elliptical. If a deck needs to be replaced every two years, it’s ‘just a cost of doing business’. Free yourself from what you know about treadmills with the new Star Trac FreeRunner™. This patent-pending treadmill generates a revolutionary feel for both runners and walkers with its HexDeck System – an aluminium running deck supported by proprietary hexagonal polymer suspension. Whether you’re a facility buyer, performance runner, or recovering from an injury, this treadmill improves performance and comfort, while also significantly increasing belt and deck life.

A standard treadmill is a hindrance to aggressive training, potentially causing injury or pain from repetitive pounding on an unforgiving surface. The FreeRunner’s HexDeck offers unprecedented responsiveness with an initial cushion and flex when the foot strikes, reacting immediately to impact. The returning support for the push off the toe mimics that of an Olympic track. University-based research participants described the feeling as “very easy on the legs, with low impact on the feet”, and “like less work than a standard treadmill.” For running members, there is no better outdoor training substitute than the FreeRunner.

FreeRunner’s aluminium deck dissipates heat and reduces wear and tear In an independent study by California State University, Fullerton, more than three out of four study participants preferred the FreeRunner to a traditional treadmill. For those members who are less fond of rigorous cardio sessions, the unique design of the FreeRunner makes aerobic activity easier on the body for every fitness level.

world record holder, Sonja Friend-Uhl, says: “If there’s one word I’d use to describe the feel of the FreeRunner it would be ‘responsive’. The surface and mechanics allow one’s running or walking form and gait to work FOR them. “It’s not so soft that it slows down your cadence, rather it cushions your impact and allows your foot to roll and then push off efficiently. It’s the closest surface to a Mondo (all-weather) running track I have ever experienced.”

Facility owners will also enjoy reduced maintenance requirements. FreeRunner’s aluminium deck dissipates heat and keeps the belt surface cooler than a traditional treadmill, reducing wear and tear and extending belt life. Star Trac says its FreeRunner is the only cardio product to use a thin, phenolic layer that can be replaced when worn, rather than changing the entire deck. “Star Trac has taken back its position at the front of the pack,” says Tim Hawkins, Core’s global VP of sales and marketing. “We were one of the industry’s first brands with a deep heritage in the treadmill business as one of the originators of tracking technology. Star Trac is also unveiling a new series of consoles with OpenHub technology, that will take the treadmill experience to even greater heights. ● www.corehandf.com fitness-kit.net KEYWORD

The new consoles will feature a high definition screen