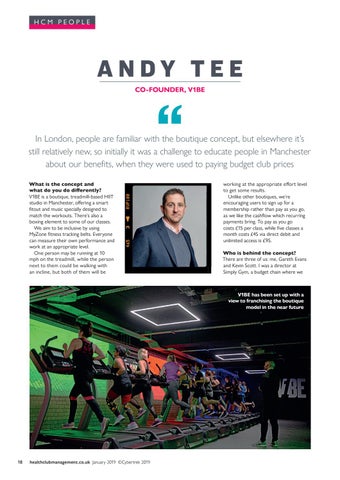 In London, people are familiar with the boutique concept, but elsewhere it’s still relatively new, so initially it was a challenge to educate people in Manchester about our benefits, when they were used to paying budget club prices What is the concept and what do you do diﬀerently? V1BE is a boutique, treadmill-based HIIT studio in Manchester, oﬀering a smart fitout and music specially designed to match the workouts. There’s also a boxing element to some of our classes. We aim to be inclusive by using MyZone fitness tracking belts. Everyone can measure their own performance and work at an appropriate level. One person may be running at 10 mph on the treadmill, while the person next to them could be walking with an incline, but both of them will be

working at the appropriate eﬀort level to get some results. Unlike other boutiques, we’re encouraging users to sign up for a membership rather than pay as you go, as we like the cashflow which recurring payments bring. To pay as you go costs £15 per class, while five classes a month costs £45 via direct debit and unlimited access is £95. Who is behind the concept? There are three of us: me, Gareth Evans and Kevin Scott. I was a director at Simply Gym, a budget chain where we