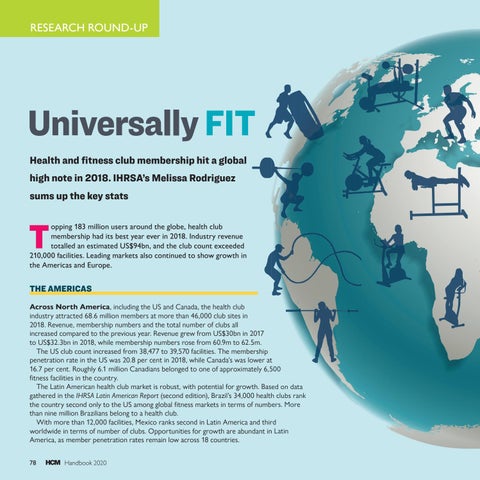 opping 183 million users around the globe, health club membership had its best year ever in 2018. Industry revenue totalled an estimated US$94bn, and the club count exceeded 210,000 facilities. Leading markets also continued to show growth in the Americas and Europe.

THE AMERICAS Across North America, including the US and Canada, the health club industry attracted 68.6 million members at more than 46,000 club sites in 2018. Revenue, membership numbers and the total number of clubs all increased compared to the previous year. Revenue grew from US$30bn in 2017 to US$32.3bn in 2018, while membership numbers rose from 60.9m to 62.5m. The US club count increased from 38,477 to 39,570 facilities. The membership penetration rate in the US was 20.8 per cent in 2018, while Canada’s was lower at 16.7 per cent. Roughly 6.1 million Canadians belonged to one of approximately 6,500 fitness facilities in the country. The Latin American health club market is robust, with potential for growth. Based on data gathered in the IHRSA Latin American Report (second edition), Brazil’s 34,000 health clubs rank the country second only to the US among global fitness markets in terms of numbers. More than nine million Brazilians belong to a health club. With more than 12,000 facilities, Mexico ranks second in Latin America and third worldwide in terms of number of clubs. Opportunities for growth are abundant in Latin America, as member penetration rates remain low across 18 countries. 78