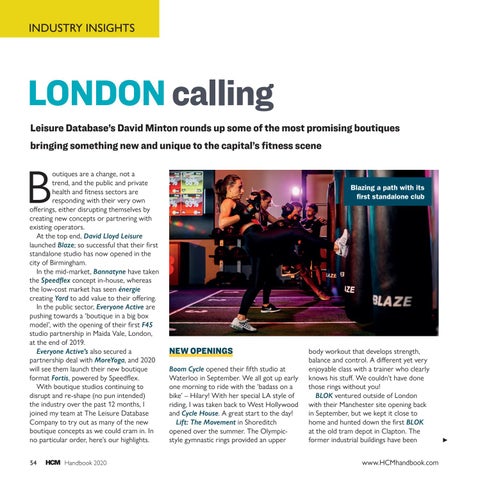 outiques are a change, not a trend, and the public and private health and fitness sectors are responding with their very own offerings, either disrupting themselves by creating new concepts or partnering with existing operators. At the top end, David Lloyd Leisure launched Blaze; so successful that their first standalone studio has now opened in the city of Birmingham. In the mid-market, Bannatyne have taken the Speedflex concept in-house, whereas the low-cost market has seen énergie creating Yard to add value to their offering. In the public sector, Everyone Active are pushing towards a ‘boutique in a big box model’, with the opening of their first F45 studio partnership in Maida Vale, London, at the end of 2019. Everyone Active’s also secured a partnership deal with MoreYoga, and 2020 will see them launch their new boutique format Fortis, powered by Speedflex. With boutique studios continuing to disrupt and re-shape (no pun intended) the industry over the past 12 months, I joined my team at The Leisure Database Company to try out as many of the new boutique concepts as we could cram in. In no particular order, here’s our highlights. 54

Blazing a path with its first standalone club

NEW OPENINGS Boom Cycle opened their fifth studio at Waterloo in September. We all got up early one morning to ride with the ‘badass on a bike’ – Hilary! With her special LA style of riding, I was taken back to West Hollywood and Cycle House. A great start to the day! Lift: The Movement in Shoreditch opened over the summer. The Olympicstyle gymnastic rings provided an upper

body workout that develops strength, balance and control. A different yet very enjoyable class with a trainer who clearly knows his stuff. We couldn’t have done those rings without you! BLOK ventured outside of London with their Manchester site opening back in September, but we kept it close to home and hunted down the first BLOK at the old tram depot in Clapton. The former industrial buildings have been www.HCMhandbook.com