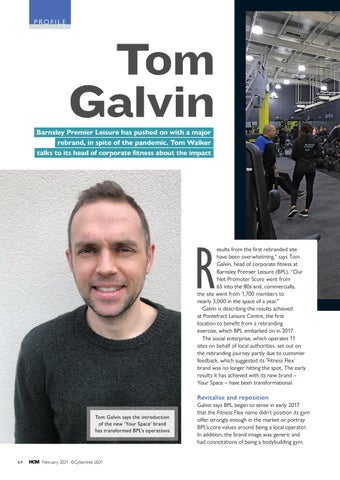 Barnsley Premier Leisure has pushed on with a major rebrand, in spite of the pandemic. Tom Walker talks to its head of corporate fitness about the impact

esults from the first rebranded site have been overwhelming,” says Tom Galvin, head of corporate fitness at Barnsley Premier Leisure (BPL). “Our Net Promoter Score went from 65 into the 80s and, commercially, the site went from 1,700 members to nearly 3,000 in the space of a year.” Galvin is describing the results achieved at Pontefract Leisure Centre, the first location to benefit from a rebranding exercise, which BPL embarked on in 2017. The social enterprise, which operates 11 sites on behalf of local authorities, set out on the rebranding journey partly due to customer feedback, which suggested its ’Fitness Flex’ brand was no longer hitting the spot. The early results it has achieved with its new brand – Your Space – have been transformational.

Galvin says BPL began to sense in early 2017 that the Fitness Flex name didn’t position its gym offer strongly enough in the market or portray BPL’s core values around being a local operator. In addition, the brand image was generic and had connotations of being a bodybuilding gym.