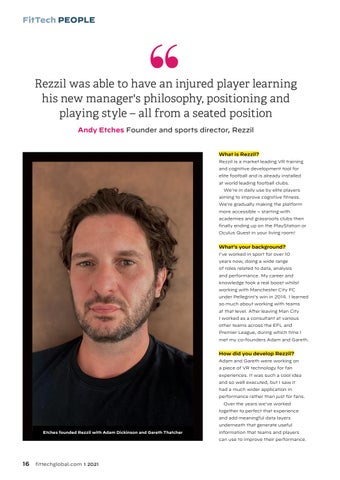 Rezzil was able to have an injured player learning his new manager&#39;s philosophy, positioning and playing style – all from a seated position Andy Etches Founder and sports director, Rezzil What is Rezzil? Rezzil is a market leading VR training and cognitive development tool for elite football and is already installed at world leading football clubs. We’re in daily use by elite players aiming to improve cognitive fitness. We’re gradually making the platform more accessible – starting with academies and grassroots clubs then finally ending up on the PlayStation or Oculus Quest in your living room!

What’s your background? I’ve worked in sport for over 10 years now, doing a wide range of roles related to data, analysis and performance. My career and knowledge took a real boost whilst working with Manchester City FC under Pellegrini’s win in 2014. I learned so much about working with teams at that level. After leaving Man City I worked as a consultant at various other teams across the EFL and Premier League, during which time I met my co-founders Adam and Gareth.

How did you develop Rezzil? Adam and Gareth were working on a piece of VR technology for fan experiences. It was such a cool idea and so well executed, but I saw it had a much wider application in performance rather than just for fans. Over the years we’ve worked together to perfect that experience and add meaningful data layers underneath that generate useful Etches founded Rezzil with Adam Dickinson and Gareth Thatcher

information that teams and players can use to improve their performance.