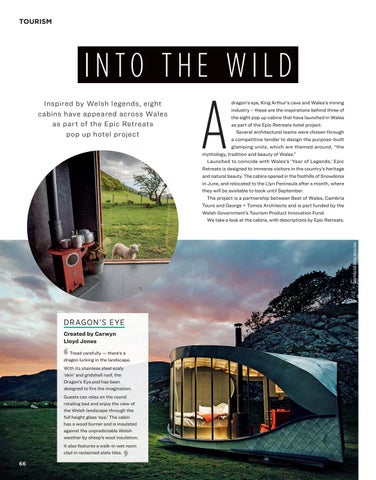 INTO THE WILD Inspired by Welsh legends, eight cabins have appeared across Wales as part of the Epic Retreats pop up hotel project

dragon’s eye, King Arthur’s cave and Wales’s mining industry – these are the inspirations behind three of the eight pop up cabins that have launched in Wales as part of the Epic Retreats hotel project. Several architectural teams were chosen through a competitive tender to design the purpose-built glamping units, which are themed around, “the mythology, tradition and beauty of Wales.” Launched to coincide with Wales’s ‘Year of Legends,’ Epic Retreats is designed to immerse visitors in the country’s heritage and natural beauty. The cabins opened in the foothills of Snowdonia in June, and relocated to the Llyn Peninsula after a month, where they will be available to book until September. The project is a partnership between Best of Wales, Cambria Tours and George + Tomos Architects and is part funded by the Welsh Government’s Tourism Product Innovation Fund. We take a look at the cabins, with descriptions by Epic Retreats.

DR AGON’S EYE Created by Carwyn Lloyd Jones Tread carefully — there’s a dragon lurking in the landscape. With its stainless steel scaly ‘skin’ and gridshell roof, the Dragon’s Eye pod has been designed to fire the imagination. Guests can relax on the round rotating bed and enjoy the view of the Welsh landscape through the full height glass ‘eye.’ The cabin has a wood burner and is insulated against the unpredictable Welsh weather by sheep’s wool insulation. It also features a walk-in wet room clad in reclaimed slate tiles.