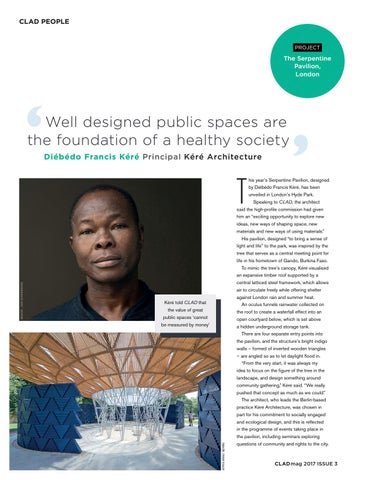 his year’s Serpentine Pavilion, designed by Diébédo Francis Kéré, has been unveiled in London’s Hyde Park. Speaking to CLAD, the architect

said the high-profile commission had given him an “exciting opportunity to explore new ideas, new ways of shaping space, new materials and new ways of using materials.” His pavilion, designed “to bring a sense of light and life” to the park, was inspired by the tree that serves as a central meeting point for life in his hometown of Gando, Burkina Faso. To mimic the tree’s canopy, Kéré visualised

an expansive timber roof supported by a central latticed steel framework, which allows air to circulate freely while offering shelter against London rain and summer heat.

An oculus funnels rainwater collected on

the value of great

the roof to create a waterfall effect into an

open courtyard below, which is set above

be measured by money’

a hidden underground storage tank. There are four separate entry points into the pavilion, and the structure’s bright indigo walls – formed of inverted wooden triangles – are angled so as to let daylight flood in. “From the very start, it was always my idea to focus on the figure of the tree in the landscape, and design something around community gathering,” Kéré said. “We really pushed that concept as much as we could.” The architect, who leads the Berlin-based practice Kéré Architecture, was chosen in part for his commitment to socially engaged and ecological design, and this is reflected in the programme of events taking place in the pavilion, including seminars exploring IMAGE: IWAN BAAN

questions of community and rights to the city.