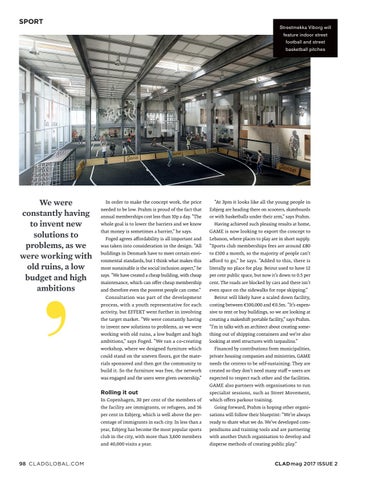 We were constantly having to invent new solutions to problems, as we were working with old ruins, a low budget and high ambitions

In order to make the concept work, the price needed to be low. Prahm is proud of the fact that annual memberships cost less than 10p a day. “The whole goal is to lower the barriers and we know that money is sometimes a barrier,” he says. Foged agrees affordability is all important and was taken into consideration in the design. “All buildings in Denmark have to meet certain environmental standards, but I think what makes this most sustainable is the social inclusion aspect,” he says. “We have created a cheap building, with cheap maintenance, which can offer cheap membership and therefore even the poorest people can come.” Consultation was part of the development process, with a youth representative for each activity, but EFFEKT went further in involving the target market. “We were constantly having to invent new solutions to problems, as we were working with old ruins, a low budget and high ambitions,” says Foged. “We ran a co-creating workshop, where we designed furniture which could stand on the uneven floors, got the materials sponsored and then got the community to build it. So the furniture was free, the network was engaged and the users were given ownership.”

Rolling it out In Copenhagen, 30 per cent of the members of the facility are immigrants, or refugees, and 16 per cent in Esbjerg, which is well above the percentage of immigrants in each city. In less than a year, Esbjerg has become the most popular sports club in the city, with more than 3,600 members and 40,000 visits a year.

“At 3pm it looks like all the young people in Esbjerg are heading there on scooters, skateboards or with basketballs under their arm,” says Prahm. Having achieved such pleasing results at home, GAME is now looking to export the concept to Lebanon, where places to play are in short supply. “Sports club memberships fees are around £80 to £100 a month, so the majority of people can’t afford to go,” he says. “Added to this, there is literally no place for play. Beirut used to have 12 per cent public space, but now it’s down to 0.5 per cent. The roads are blocked by cars and there isn’t even space on the sidewalks for rope skipping.” Beirut will likely have a scaled down facility, costing between €100,000 and €0.5m. “It’s expensive to rent or buy buildings, so we are looking at creating a makeshift portable facility,” says Prahm. “I’m in talks with an architect about creating something out of shipping containers and we’re also looking at steel structures with tarpaulins.” Financed by contributions from municipalities, private housing companies and ministries, GAME needs the centres to be self-sustaining. They are created so they don’t need many staff – users are expected to respect each other and the facilities. GAME also partners with organisations to run specialist sessions, such as Street Movement, which offers parkour training. Going forward, Prahm is hoping other organisations will follow their blueprint: “We’re always ready to share what we do. We’ve developed compendiums and training tools and are partnering with another Dutch organisation to develop and disperse methods of creating public play.”