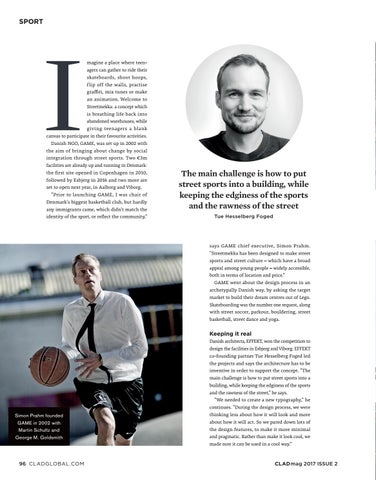 magine a place where teenagers can gather to ride their skateboards, shoot hoops, f lip off the walls, practise graffiti, mix tunes or make an animation. Welcome to Streetmekka: a concept which is breathing life back into abandoned warehouses, while giving teenagers a blank canvas to participate in their favourite activities. Danish NGO, GAME, was set up in 2002 with the aim of bringing about change by social integration through street sports. Two €3m facilities are already up and running in Denmark: the first site opened in Copenhagen in 2010, followed by Esbjerg in 2016 and two more are set to open next year, in Aalborg and Viborg. “Prior to launching GAME, I was chair of Denmark’s biggest basketball club, but hardly any immigrants came, which didn’t match the identity of the sport, or reflect the community,”

The main challenge is how to put street sports into a building, while keeping the edginess of the sports and the rawness of the street Tue Hesselberg Foged

says GAME chief executive, Simon Prahm. “Streetmekka has been designed to make street sports and street culture – which have a broad appeal among young people – widely accessible, both in terms of location and price.” GAME went about the design process in an archetypally Danish way, by asking the target market to build their dream centres out of Lego. Skateboarding was the number one request, along with street soccer, parkour, bouldering, street basketball, street dance and yoga.

Danish architects, EFFEKT, won the competition to design the facilities in Esbjerg and Viborg. EFFEKT co-founding partner Tue Hesselberg Foged led the projects and says the architecture has to be inventive in order to support the concept. “The main challenge is how to put street sports into a building, while keeping the edginess of the sports and the rawness of the street,” he says. “We needed to create a new typography,” he continues. “During the design process, we were thinking less about how it will look and more about how it will act. So we pared down lots of the design features, to make it more minimal and pragmatic. Rather than make it look cool, we made sure it can be used in a cool way.”