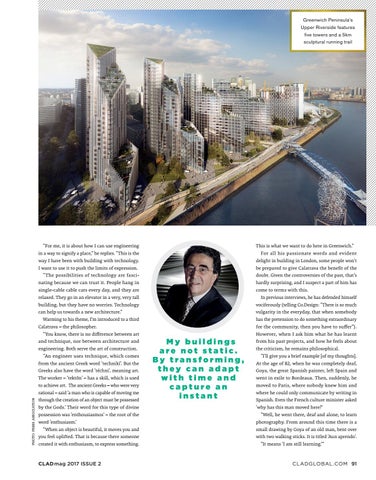 “For me, it is about how I can use engineering in a way to signify a place,” he replies. “This is the way I have been with building with technology. I want to use it to push the limits of expression. “The possibilities of technology are fascinating because we can trust it. People hang in single-cable cable cars every day, and they are relaxed. They go in an elevator in a very, very tall building, but they have no worries. Technology can help us towards a new architecture.” Warming to his theme, I’m introduced to a third Calatrava – the philosopher. “You know, there is no difference between art and technique, nor between architecture and engineering. Both serve the art of construction. “An engineer uses technique, which comes from the ancient Greek word ‘technikí’. But the Greeks also have the word ‘téchni’, meaning art. The worker – ‘tektōn’ – has a skill, which is used to achieve art. The ancient Greeks – who were very rational – said ‘a man who is capable of moving me through the creation of an object must be possessed by the Gods.’ Their word for this type of divine possession was ‘enthousiasmos’ – the root of the word ‘enthusiasm.’ “When an object is beautiful, it moves you and you feel uplifted. That is because there someone created it with enthusiasm, to express something.

My buildings are not static. By transforming, they can adapt with time and capture an instant

This is what we want to do here in Greenwich.” For all his passionate words and evident delight in building in London, some people won’t be prepared to give Calatrava the benefit of the doubt. Given the controversies of the past, that’s hardly surprising, and I suspect a part of him has come to terms with this. In previous interviews, he has defended himself vociferously (telling Co.Design: “There is so much vulgarity in the everyday, that when somebody has the pretension to do something extraordinary for the community, then you have to suffer”). However, when I ask him what he has learnt from his past projects, and how he feels about the criticism, he remains philosophical. “I’ll give you a brief example [of my thoughts]. At the age of 82, when he was completely deaf, Goya, the great Spanish painter, left Spain and went in exile to Bordeaux. Then, suddenly, he moved to Paris, where nobody knew him and where he could only communicate by writing in Spanish. Even the French culture minister asked ‘why has this man moved here?’ “Well, he went there, deaf and alone, to learn photography. From around this time there is a small drawing by Goya of an old man, bent over with two walking sticks. It is titled ‘Aun aprendo’. “It means ‘I am still learning.’”