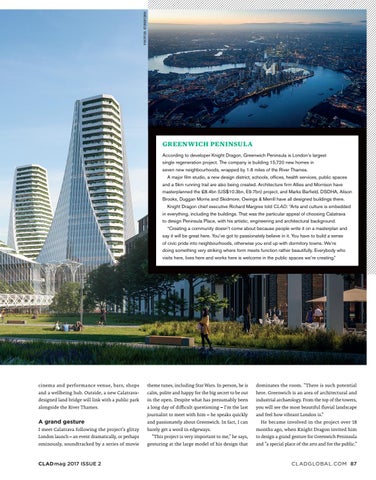 GREENWICH PENINSULA According to developer Knight Dragon, Greenwich Peninsula is London’s largest single regeneration project. The company is building 15,720 new homes in seven new neighbourhoods, wrapped by 1.6 miles of the River Thames. A major film studio, a new design district, schools, offices, health services, public spaces and a 5km running trail are also being created. Architecture firm Allies and Morrison have masterplanned the £8.4bn (US$10.3bn, E9.7bn) project, and Marks Barfield, DSDHA, Alison Brooks, Duggan Morris and Skidmore, Owings &amp; Merrill have all designed buildings there. Knight Dragon chief executive Richard Margree told CLAD: “Arts and culture is embedded in everything, including the buildings. That was the particular appeal of choosing Calatrava to design Peninsula Place, with his artistic, engineering and architectural background. “Creating a community doesn’t come about because people write it on a masterplan and say it will be great here. You’ve got to passionately believe in it. You have to build a sense of civic pride into neighbourhoods, otherwise you end up with dormitory towns. We’re doing something very striking where form meets function rather beautifully. Everybody who visits here, lives here and works here is welcome in the public spaces we’re creating.”

cinema and performance venue, bars, shops and a wellbeing hub. Outside, a new Calatravadesigned land bridge will link with a public park alongside the River Thames.

A grand gesture I meet Calatrava following the project’s glitzy London launch – an event dramatically, or perhaps ominously, soundtracked by a series of movie

theme tunes, including Star Wars. In person, he is calm, polite and happy for the big secret to be out in the open. Despite what has presumably been a long day of difficult questioning – I’m the last journalist to meet with him – he speaks quickly and passionately about Greenwich. In fact, I can barely get a word in edgeways. “This project is very important to me,” he says, gesturing at the large model of his design that

dominates the room. “There is such potential here. Greenwich is an area of architectural and industrial archaeology. From the top of the towers, you will see the most beautiful fluvial landscape and feel how vibrant London is.” He became involved in the project over 18 months ago, when Knight Dragon invited him to design a grand gesture for Greenwich Peninsula and “a special place of the arts and for the public.”