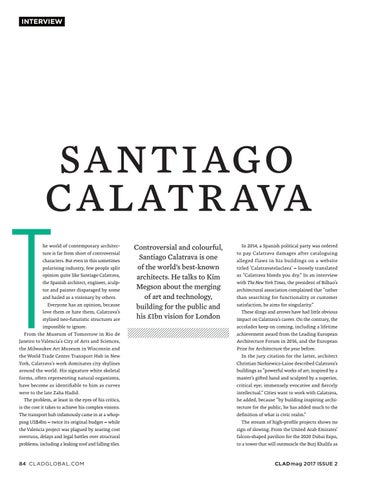 SA NTI AGO  CA L ATR AVA he world of contemporary architecture is far from short of controversial characters. But even in this sometimes polarising industry, few people split opinion quite like Santiago Calatrava, the Spanish architect, engineer, sculptor and painter disparaged by some and hailed as a visionary by others. Everyone has an opinion, because love them or hate them, Calatrava’s stylised neo-futuristic structures are impossible to ignore. From the Museum of Tomorrow in Rio de Janeiro to Valencia’s City of Arts and Sciences, the Milwaukee Art Museum in Wisconsin and the World Trade Center Transport Hub in New York, Calatrava’s work dominates city skylines around the world. His signature white skeletal forms, often representing natural organisms, have become as identifiable to him as curves were to the late Zaha Hadid. The problem, at least in the eyes of his critics, is the cost it takes to achieve his complex visions. The transport hub infamously came in at a whopping US$4bn – twice its original budget – while the Valencia project was plagued by soaring cost overruns, delays and legal battles over structural problems, including a leaking roof and falling tiles.

Controversial and colourful, Santiago Calatrava is one of the world’s best-known architects. He talks to Kim Megson about the merging of art and technology, building for the public and his £1bn vision for London

In 2014, a Spanish political party was ordered to pay Calatrava damages after cataloguing alleged f laws in his buildings on a website titled ‘Calatravatelaclava’ – loosely translated as “Calatrava bleeds you dry.” In an interview with The New York Times, the president of Bilbao’s architectural association complained that “rather than searching for functionality or customer satisfaction, he aims for singularity.” These slings and arrows have had little obvious impact on Calatrava’s career. On the contrary, the accolades keep on coming, including a lifetime achievement award from the Leading European Architecture Forum in 2016, and the European Prize for Architecture the year before. In the jury citation for the latter, architect Christian Narkiewicz-Laine described Calatrava’s buildings as “powerful works of art; inspired by a master’s gifted hand and sculpted by a superior, critical eye; immensely evocative and fiercely intellectual.” Cities want to work with Calatrava, he added, because “by building inspiring architecture for the public, he has added much to the definition of what is civic realm.” The stream of high-profile projects shows no sign of slowing. From the United Arab Emirates’ falcon-shaped pavilion for the 2020 Dubai Expo, to a tower that will outmuscle the Burj Khalifa as